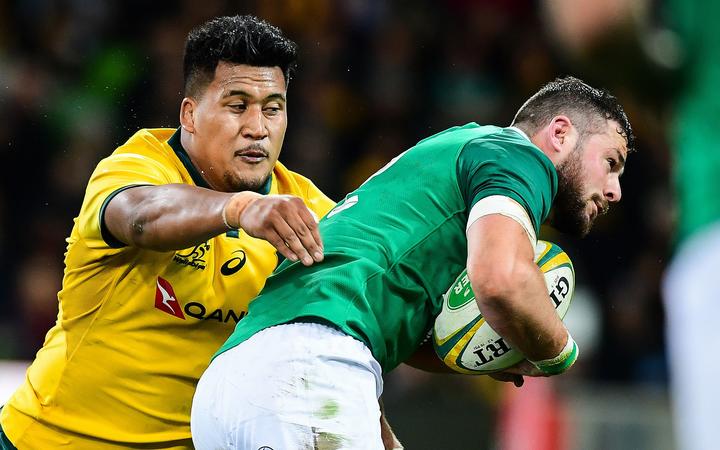 Three days of managed isolation is set to come to an end for the Wallabies overnight.

In New Zealand for two Bledisloe Cup matches next month, the Australian side were going through their mandatory 14-day quarantine in a Christchurch hotel.

Pending negative Covid-19 tests on Monday for the entire touring party, they would have the freedom to train as a full squad tomorrow.

The Wallabies arrived in Christchurch on Friday night and were escorted to their hotel by the New Zealand Defence Force.

While their movements had been heavily limited, Kiwi-born hooker Brandon Paenga-Amosa said he had enjoyed the three days.

“I must be honest, isolation has been pretty cool.

“I know myself, I’ve probably put on a couple of [kilograms] being in here because the food is unreal but I’m excited to get out and hit the field a bit, lose a couple of the kilos I’ve put on sitting in this room.

“It’s exciting and I know all the boys are itching to get out on the field.”

Despite the isolation restrictions, passing the time hadn’t been an issue for most of the 44-strong touring party.

The squad had permission to use a small courtyard at specific times throughout the day and could talk to each other, from a distance and with masks on, during those times.

Paenga-Amosa said, when he had been confined to his room, he hadn’t had trouble filling in the hours.

“The two biggest things are, firstly, taking care of my hair. Making sure my hair looks good and making sure I’m keeping it clean.

“Probably the second one would be [that] I’m a massive Marvel fan so I’ve just been catching up on Marvel [movies], starting from the beginning.

“I think I’m halfway through, I’ve watched something like 14 movies so far since we left [Australia].

“Also they put a bike in my room. It’s a massive stitch up, they put an exercise bike in all the front rowers’ rooms, so that’s what we’ve been doing.”

The latter had been part of finding unique ways to stay fit and strong ahead of their likely first day of freedom on Tuesday.

Also part of the Australian players preparation for that would be digging out their warm clothing.

Their release from isolation would come as a cold snap swept up the South Island, with temperatures dropping significantly and snow falling to sea level in some places.

Paenga-Amosa said, given his Kiwi roots, he was ready for the grim weather.

But the 24-year-old Queensland Reds player admitted that wouldn’t be the same for the whole Australian squad.

“Well it wouldn’t make sense there being snow on the field if it wasn’t New zealand.

“If it’s cold, if it’s wet, that’s what we expected, especially down here in the South Island. I mean, it’d be the dream if it was nice and sunny but I guess that’s just Aotearoa, the land of the long white cloud.

“It’ll be a massive shock to a couple of the boys that aren’t expecting that [but] I’m excited for it.”