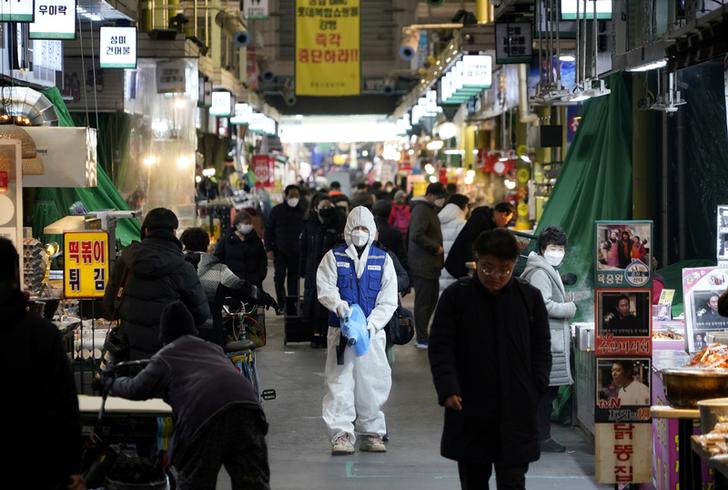 An employee from a disinfection service company sanitizes the floor of a traditional market in Seoul, South Korea, February 24, 2020. REUTERS/Kim Hong-Ji TPX IMAGES OF THE DAY

New York (Reuters) – The S&P 500 and the Dow Jones Industrial Average on Monday suffered their biggest one-day percentage losses in two years after a surge in coronavirus cases outside China fanned worries about the global economic impact of a potential pandemic.

Investors sold riskier assets and rushed to traditionally safer bets such as gold and U.S. Treasuries after countries including Iran, Italy and South Korea reported a rise in virus cases over the weekend even as China eased curbs with no new cases reported in Beijing and other cities.

The benchmark S&P 500, which represents over 44% of the market capitalization of all global equities, lost $927 billion of its value on Monday alone and $1.33 trillion since its closing high on Wednesday last week, according to S&P Dow Jones Indices senior analyst Howard Silverblatt.

The S&P and the blue-chip Dow turned negative for the year to date and the Dow dropped more than 1,000 points on the day for only the third time in its history.

“We’re not likely to make any progress higher until we have evidence the spread of the coronavirus is decelerating,” said Mark Luschini, chief investment strategist at Janney Montgomery Scott in Philadelphia.

Apple Inc slid 4.8% as data showed sales of smartphones in China tumbled by more than a third in January.

Of the S&P’s sectors, the defensive utilities, real estate and consumer staples indexes fell the least on the day.

150th anniversary: The scars of war