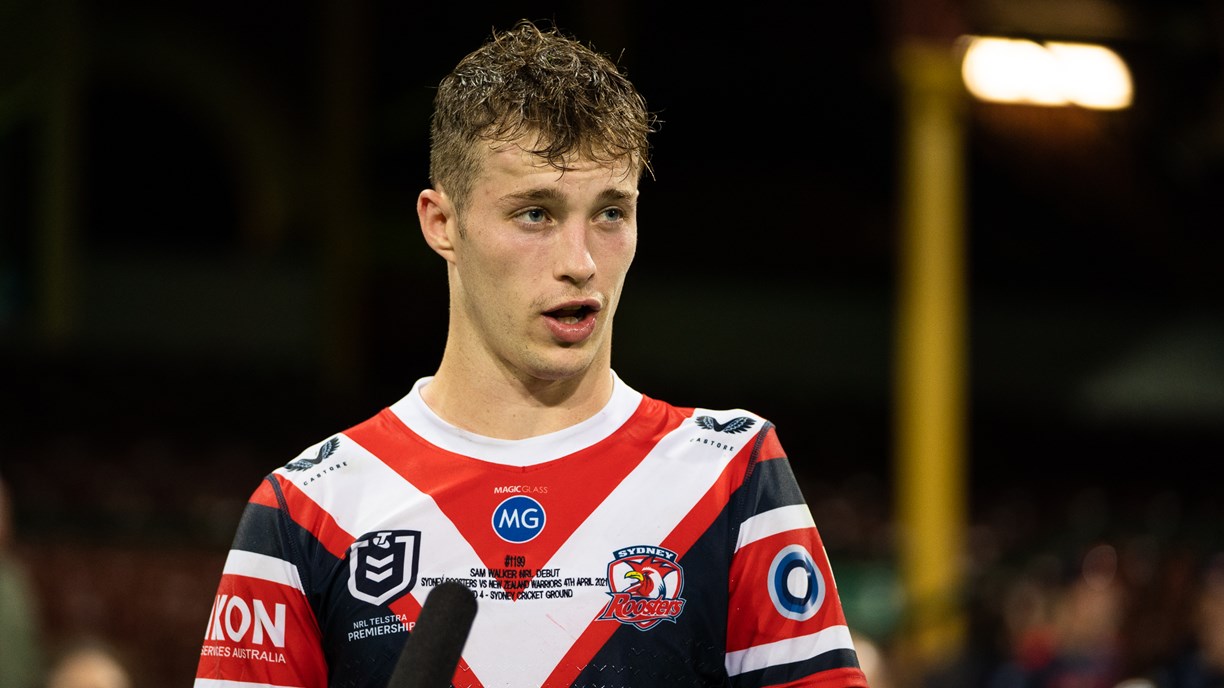 (NRL)—With a stylish skip and a short ball to set up a try, 18-year-old Roosters halfback Sam Walker underlined his NRL arrival in an Easter Sunday victory over the NZ Warriors.

Filling the boots of superstar playmaker Luke Keary after his ACL tear last week, Walker – just 78kg and not long out of high school – belied his boyish looks during an ultra-composed first-grade debut.

Veteran winger Brett Morris – who has never lost to the Warriors in 15 matches – defied a calf cork to collect a double in the 32-12 win at the SCG and take his season tally to a remarkable nine tries in four games.

Walker sparingly showed his special skills, save for a few whizzing long passes, but did his job with impressive confidence.

“A lot of people that have watched Sam [would say] there’s a lot of spectacular stuff, but he actually decided to put that on hold while he built some good defence,” Roosters coach Trent Robinson said.

“Rather than trying to put everything into one game, he said, ‘I’m going to start how the team needs and then I’ll build again next week’.

“He kicked the ball really well and supported really well. I thought it was a really good foundation game for him and we saw little bits of Sammy coming out.

“That was a really good temperament game to start his NRL career … There’s a lot of footy in the kid.”

The son of Ben Walker nailed his only shot at goal and was defensively sound, making 17 tackles and only missing two. Some of the Ipswich product’s family flew from Queensland to watch him.

The highlight was his silky 25th-minute try assist for Nat Butcher where he bounced across the field, holding up the defence, and then delivered a deft pass to put the back-rower over at close range.

“It was crazy to run out there with some boys that I’ve idolised for a long time,” Walker told RoostersTV. “To get out there with them was surreal, I couldn’t believe it. I sort of blinked and it was over.”

Other storylines at the SCG included Warriors prop Addin Fonua-Blake (knee) and Roosters second-rower Sitili Tupouniua (failed HIA) going off within the opening 15 minutes while Morris (calf cork) was replaced once the result was sealed as a precaution.

“I think you could see that Rads was [having] his first game back, and he did well because he’s a very good player, but he also was pretty tired out there and copped some hits,” Robinson said.

Butcher’s try sparked the Roosters, who trailed 6-0 and then 12-4, into action. A set later, Walker hoisted a bomb that was spilled by Warriors fullback Roger Tuivasa-Sheck and he was then involved in a backline shift that resulted in Morris’s first try.

While the spotlight was firmly fixed on the young No.7 from the get-go, opposing playmaker Kodi Nikorima created the opening points with a seventh-minute bomb that was pounced upon by Adam Pompey.

Nikorima was poised to score himself after Tuivasa-Sheck split the line, but Morris zoomed in-field to cut him down. It proved decisive as James Tedesco got the Roosters on the board in the next set.

The Tricolours have missed Radley’s ball-playing and he fed the Steeden to Tedesco 40 metres out, but the custodian did it mostly on his own as he exploded between Wayde Egan and Sean O’Sullivan.

Siosiua Taukeiaho’s missed conversion kept the Warriors in front and they quickly extended the margin when second-rower Tohu Harris grounded a Tuivasa-Sheck grubber with his fingertips.

The Roosters led 16-12 at the break before Morris, five-eighth Drew Hutchison and Brett’s brother Josh completed a dominant performance with second-half tries.