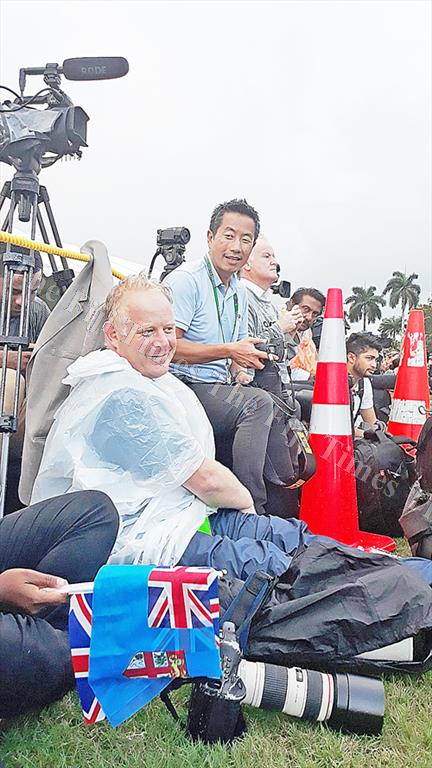 But the other reporter’s pub story favourite is telling the tales of our encounters with princes, princesses and other tiara-ed folks.

The 1970s were a big decade for British royal visits to Fiji – probably something to do with pushing us out of the colonial nest and getting us through independence while remaining on the side with the Commonwealth.

In those years the local media were duly accredited along with the overseas press corps and got their up close exclusives without causing any diplomatic incidents. Tough luck this time around, chaps, where we have been relegated out the back, except for the government approved Ministry of Information.

The royals had a very busy year in 1970, with Queen Elizabeth and Princess Anne visiting in March. I don’t remember a lot about that tour because I think that was the time I had chicken pox and had to skulk behind my photographer so nobody would notice the (no longer infectious) scabs on my face.

I scored a scoop during the Princess’s visit to a Raiwaqa low cost flat, which resulted in a charming picture of her playing with a baby on the mat and got an international run.

It was crowded but nobody seemed worried that we would knock over a royal.

As a reporter on The Fiji Times in those years, I became something of a newsroom expert on the royals and of course, knew lots of stories that never made it into print.

Prince Charles also came in 1970, in October for the big bash to celebrate independence.

It was a most moving affair and again we could give it full local coverage with our very own pictures.

After the flag, we all called the Union Jack was taken down, a number of journalists decided to pop into the Grand Pacific Hotel for a quick beer to celebrate.

The hotel had extended a beer garden onto the front lawn for the occasion, about where the parking area on the right is now located.

When a waiter came to take our orders, he refused to serve us on the grounds that there were two women in the party and females were not allowed in public bars in those days.

We complained, begged and pleaded but women were apparently much more dangerous to public morality than to the wellbeing of royalty, and we were kicked out.

It was a sad moment for feminism as well as the loyal supporters of royals, whose pictures were prominent in many work and public places and many more private homes and bure throughout the land. Next morning after the new banner blue was raised, the press corps was delighted to hear Prince Charles read out in his best British the message from Her Majesty his mother which began “My husband and I…”.

It rapidly became the newsroom phrase of the week, guaranteed to reduce reporters to tears of mirth.

There wasn’t really a lot of funny stuff happening otherwise. A more jovial affair was the next visit of Prince Charles, in February 1977.

I think this was the one that involved jaunting to Labasa on a suffocatingly hot day that began with an early morning plane ride.

While the prince was whisked around in a vehicle which the media strongly suspected was air conditioned, we were piled into a local bus. As part of the motorcade, the bus company had decorated it with red balloons.

Back in the day people were a bit shy of royalty and tended to be respectfully silent when their highnesses passed.

But when they saw the decorated bus with a number of Labasian reporters and photographers aboard, they let their high spirited cheers rip.

It must have puzzled the royal entourage that we were getting all the acclaim.

Grab a copy of today’s The Sunday Times or download the Fiji Times App to read the rest of this story.