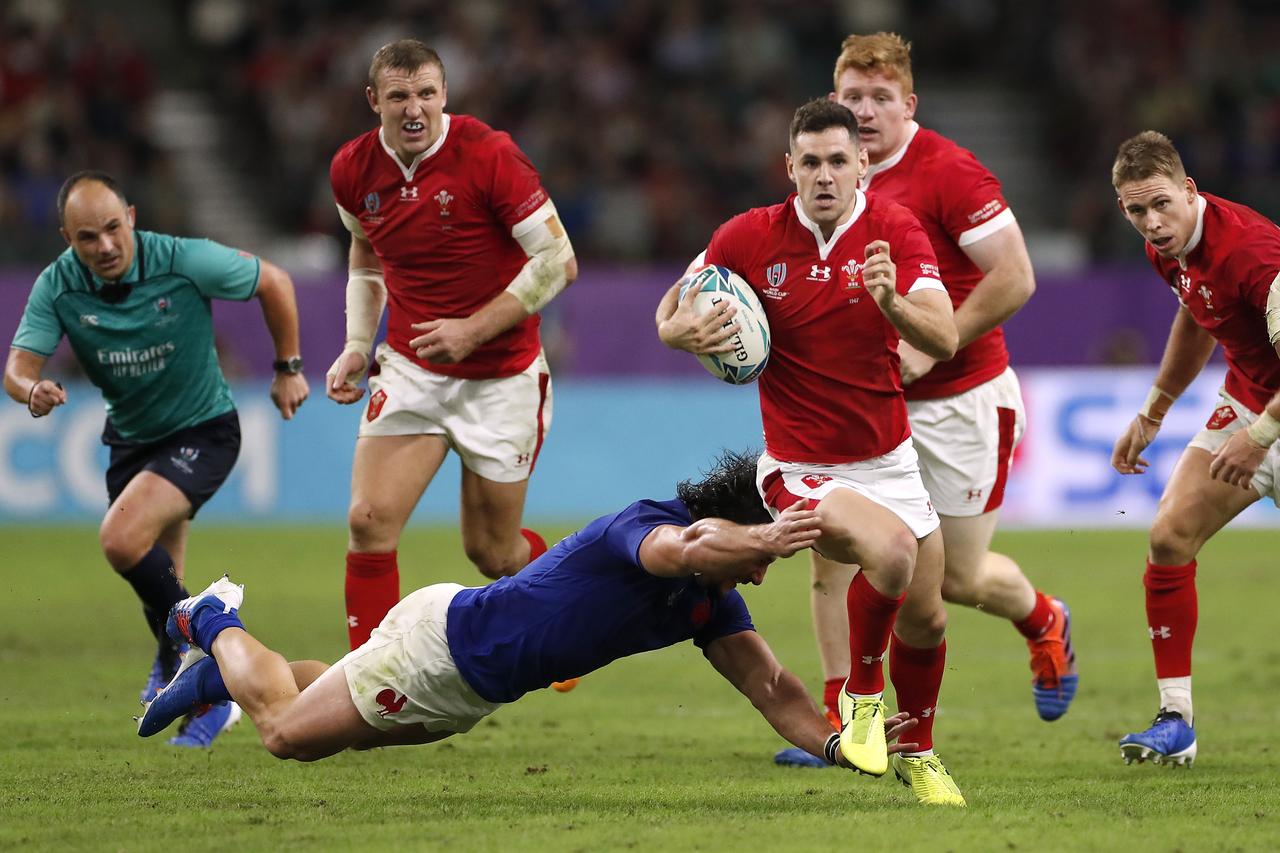 OITA, Japan (Reuters) – Wales rode their luck to advance to their third World Cup semi-final when Ross Moriarty’s dramatic late try gave then a 20-19 victory over a battling France team reduced to 14 men for the final half hour on Sunday.

France were leading 19-10 when lock Sebastien Vahaamahina, in a moment of madness, inexplicably elbowed Aaron Wainwright’s in the face and was shown a straight red.

Though the French defended superbly, replacement number eight Moriarty, yellow-carded himself earlier, clinched the encounter six minutes from time by grabbing a loose ball and forcing his way over.

Eight years ago an early red card for Wales captain Sam Warburton played a key role as France triumphed 9-8 in their World Cup semi-final in Auckland.

This time it was the Welsh who benefited and edged a one-point game to reach the last four for the third time, having lost to New Zealand in 1987 – when Moriarty’s father Paul scored a try in the third-place playoff win over Australia – and France in 2011.

Wales also saw two French kicks during the first half – an attempted conversion and penalty by flyhalf Romain Ntamack – hit an upright and bounce clear.

Wales will face either South Africa or Japan, who meet later on Sunday.

“I think the better team lost today,” conceded Welsh coach Warren Gatland. “That red card was significant. Our boys don’t give up, though. It was a tough physical game and we kept plugging away.

“Tactically, France were really smart in the way they played today. I’m proud of the boys because other teams may have capitulated but we didn’t and we are here for another couple of weeks.”

The French will be furious that they allowed themselves to be forced onto the defensive, having played superbly for most of the opening 50 minutes.

The perennial question of ‘which France will turn up?’ was answered emphatically as they roared into a 12-0 lead after eight minutes, playing with pace, dynamism and total commitment.

Vahaamahina bundled over for the first score before Damian Penaud set up the second by beating Liam Williams in an aerial duel – which very few people can manage – to set his backline moving and eventually sent flanker Charles Ollivon over.

Wales had barely swung a punch but got on the scoreboard when Wainwright scooped up a dropped ball to gallop between the posts for his first international try.

Wales, who suffered a blow pre-match when star centre Jonathan Davies was ruled out through injury, then lost another key man in number eight Josh Navidi.

The first contribution of his replacement Moriarty was a high tackle that sent him straight back off again for 10 minutes in the sin-bin.

France duly took advantage with their third try as Penaud managed to unload a diving pass out of the tackle to Virimi Vakatawa, and the unstoppable centre proved just that.

The halftime score of 19-10 was extremely kind to Wales and every player in both camps would have been well aware that earlier this year France led 16-0 at halftime in Paris but lost 24-19 as Wales completed the biggest comeback in Six Nations history.

Something similar then began to look likely when Vahaamahina turned from hero to villain as he was shown a red card after ludicrously smashing his elbow into the face of Wainwright in a maul on the Welsh line.

France responded by buckling down and showing real aggression in defence, giving up just one Biggar penalty in the next 25 minutes.

“We weren’t really disorganised but we should have reacted differently. We didn’t show enough character because we had opportunities to stretch the lead,” he said.

“So that’s why I’m saying the outcome of the match is difficult to accept.”

That outcome had looked increasingly like a memorable French victory, only for replacement scrumhalf Tomos Williams to strip the ball from French hands after a five-metre scrum and Moriarty, villain turned hero, more than made up for his earlier yellow by grabbing it and diving over.

After a long TMO check, the try was confirmed. Biggar converted and Wales controlled the remaining minutes to record their eighth win in the teams’ last nine meetings – and by far the most important.