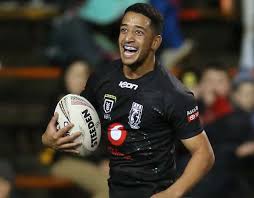 VODAFONE Fiji Bati halfback Brandon Wakeham had tears in his eyes when he ran on to the pitch at Leichhardt Oval as he fulfilled a lifelong dream of playing for his nation.

“To run out I had tears in my eyes to represent where my dad is from,” Wakeham said.

“I have always wanted to wear the Bati jersey and I couldn’t have asked for a better debut.”

An extraordinary debut, as the Canterbury Bulldog halfback played the puppeteer during the match, guiding the Bati to a 58-14 win over the Lebanon Cedars during their Pacific Test Series encounter raking up a personal tally of 20 points and named man of the match in the process.

Wakeham, who is part Lebanese, was thankful for his mother’s support who was always in his corner.

“When we got to about 40 points I started feeling sorry for them so I didn’t want to score any more points. My mum was in the grandstand she is Lebanese. But she supports me regardless of any team I play for and it’s just great.”

Wakeham has now set his target to represent Fiji at the Rugby League World Cup in 2021.