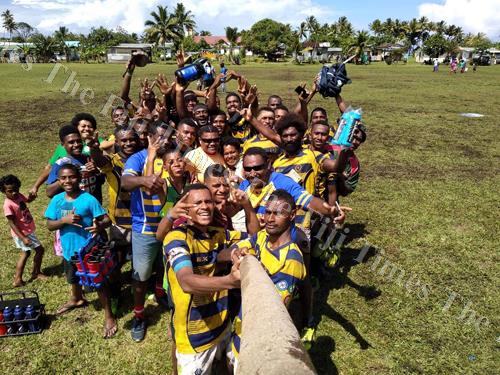 WAINITAKELE volleyball team won the Nacavanadi volleyball tournament beating the Hotspring team two sets to one in the final.

After the two weeks program of the train the trainer and the basics of sports outreach, that took place on the island for the past two weeks, the participants of the programme involved with sports administration organised the competition with their trained umpires that concluded the volleyball competition on a high note.

Wainitakele team captain Mili Draunibaka was happy with her team’s performance and believes that more could be done to lift the standard of their performance and competition as a whole.

“It’s a good outreach that the Fiji National Sports Commission brought to the island training sports administratives and umpires and they ran the competition well,” Draunibaka said.

“I’m proud of the performance of the Wainitakele team and I hope that they will continue to practise daily with their volleyball skills and tour the mainland to compete with other local teams.

The Lautoka volleyball and netball rep believes that future stars in volleyball can be groomed on the island of Gau to represent Fiji in the future.

“If the island of Gau can raise and groom national rugby reps like the maestro himself Waisale Serevi, Marika Vunibaka and the Rauluni brothers than nothing is impossible for these volleyball players to make a name for themselves as well, said Draunibaka.