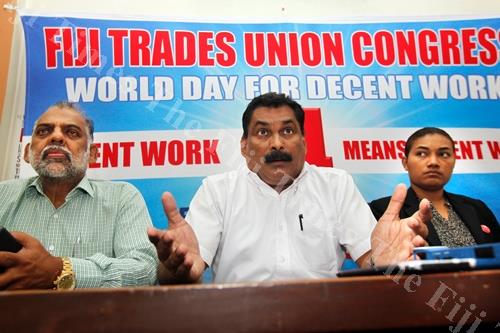 NATIONAL Union of Workers (NUW) general secretary Felix Anthony says the Water Authority of Fiji’s (WAF) excuse of a “restructure” to shed 2900 jobs on May 1 was a cruel joke on the workers and the families that depended on them for survival.

He was responding to comments made by WAF board chairman Bhavesh Kumar Patel in this newspaper last Saturday that the government statutory organisation was going through a restructure and would “finalise its employee numbers shortly”.

“Anyone who is leading an organisation such as WAF knows quite well that any restructure would require planning and discussion and consultation with the union as the workers’ representative,” Mr Anthony said.

“The impact on the workers’ families involved would be taken into consideration.

“Workers were only informed last week that this Wednesday would be their final day at work.

“I cannot even imagine what the families of the 2900 workers are going through.

“There are a number of issues with this mass termination — 600 permanent workers will lose their jobs and the contract workers have been working there for a number of years, anywhere from three to seven and even more.

“In our view they cannot be looked at as contract workers any more, they would have to be considered as permanent staff.”

Mr Anthony said he had informed WAF workers not to sign termination letters issued to them and they would turn up to work tomorrow.