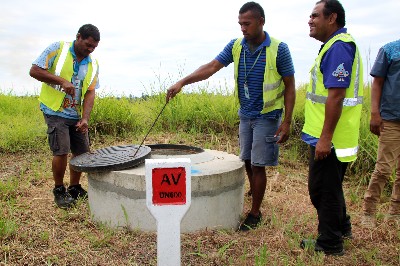 WAF crew members conducting site-inspections on one of the air-valve chambers in Nadi on Wednesday, November 11, 2018. Picture: SUPPLIED

THE Water Authority of Fiji (WAF) has launched an investigation regarding the suspected theft of 29 air-valves that has been reported missing following a recent site inspection in the Western Division.

“While verifying the pipeline components and valve status from Nagado to the Votualevu Rice mill in Nadi, WAF crew members identified a total of 11 out of the 15 air-valves that were installed under the DN600 pipeline project missing and are to assumed to be stolen, also missing are the slabs of the washout valves,” the statement said.

“The DN600 pipeline project which was cross-connected at two locations (Votualevu Rice Mill and Nadele top) during the recent Nagado Water Shutdown in September was supposed to be tested last weekend before commissioning the pipeline this week.”

The project aims to boost water supply to the existing DN500 that caters for Nadi along the back road and towards the Southern end, and this is part of the planned improvement works to the Nadi water system.

The matter is now under investigation and has been referred to the Fiji Police Force.