Vuniwaqa: Do not lie on forms 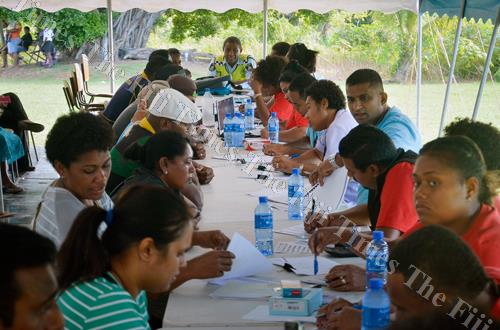 A number of people turned up during the Home Care distributions at Lovu Sangam School in Lautoka yesterday. Picture: BALJEET SINGH

THE Ministry of Social Welfare has issued a warning to people applying for assistance under the Homes and Social Welfare CARE program not to lie with their applications. Speaking to this newspaper yesterday, Minister for Women, Children and Poverty Alleviation Mereseini Vuniwaqa said there was a Statutory Declaration on each form that people needed to heed.

“The form clearly states that they should not be lying on their forms about where they live or what damage they incurred,” she said.

“If they lie then the laws are clear. “They will be arrested, prosecuted and could be fined if found guilty. “It is not worth it — to lie because there are consequences people will face if they lie on the forms.”

She said residents who were not from a list of areas provided by the National Disaster Management Office were not eligible for the assistance. “If they are not on the list they will not be getting any assistance.

“If you are someone who is still trying to get assistance from Government even though you are not from an affected area, then you will be fined. “We will be carrying out follow-up assessments once we have completed giving out the assistance.”

She said their priority at the moment were to issue forms to residents affected in last month’s cyclones.

“Right now our teams are moving around in all of the districts and making sure that every area in our list is covered.” Mrs Vuniwaqa was in Nadi and Sigatoka yesterday observing teams that were distributing the Home and Welfare CARE forms.