Voters and debt – The next Finance Minister’s poisoned chalice

People lining up to cast their votes on elections day. Picture: FILE

Fiji voters all know that ruling parties are all too eager to give out freebies, just before elections. It has happened in previous elections, and it is happening again.

Few voters think about the hidden reality that these freebies are being paid for by taxpayers themselves.

If a Minister for Economy recklessly pays for current expenditure by borrowing more and more (thereby building up the public debt), this must condemn future generations (their children) to pay for today’s lack of frugality by the Government.

Worse still, a future Minister of Economy will not have the leeway to increase expenditure on necessary items such as roads, water, education, health, and social welfare.

On the contrary, the minister may have to reduce expenditure, in order to bring down the public debt to manageable levels.

That is exactly the case in Fiji today because of Aiyaz Sayed-Khaiyum’s “management” of Government finances for the past 14 years.

I have tried to explain this public debt danger in an earlier article, by comparing the different governments of Rabuka, (the late) Laisenia Qarase and Voreqe Bainimarama (The Fiji Times January 29, 2022) and their debt to GDP ratios.

Some readers have said that the earlier article comparing Fiji’s public debt to GDP ratios was too difficult to understand for ordinary readers and what it meant for their everyday lives.

This article therefore tries to reduce the problem to the household level, with the numbers perhaps a bit easier for ordinary readers to understand, but still quite frightening.

The numbers of households in Fiji have been derived from Fiji Bureau of Statistics household surveys, while the GDP (income) and public debt figures are in current dollar amounts, from the Reserve Bank of Fiji website.

Because these dollar amounts have not been deflated by the Consumer Price Index, try not to compare the amounts for one year with another or from Table 1 and Table 2 below.

I can assure you that the deflated numbers are even more horrifying because real incomes of ordinary people have decreased due to inflation.

Graph 1 gives the complete picture of the public debt (the lower line in the graph) rising steadily after 1992, but far more rapidly after 2007. Then it rose sharply to 2020/2021, because the Bainimarama Government refused to tighten its belt during COVID, preferring to borrow even more. Unfortunately, the GDP (black line in the graph) collapsed over 2020 and 2021, because of the collapse of tourism and the two curves almost met in 2021. Of course, the ratio of household debt to household income also rose rapidly during this entire period, but far less under Rabuka than under Bainimarama. 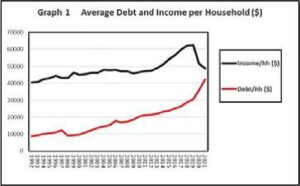 Household Debt and Income under Bainimarama

The squeeze on expenditure

Make no mistake that the next Government that comes in will have to deal with this massive public debt. Graph 2 The previous article had showed that the public debt to GDP ratio left by Rabuka in 1998 was only 21 per cent (quite low). The public debt left by the late Qarase in 2006 was 37 per cent (high, but still manageable). However, the public debt left by Bainimarama (or really Minister for Economy Mr Sayed-Khaiyum) in 2021 was a massive 86 per cent and likely to be higher in 2022. I have pointed out previously that the public debt charges must be paid before the Government can allocate a single extra penny to roads or water or hospitals or education or social welfare. My previous article had also shown that while Rabuka had about 77 per cent of Government revenue left after loan repayments, Mr SayedKhaiyum only had 64 per cent of revenue left in 2020-21, far less able to pay for needed government services, let alone improvements. It is clear that the next Government after the 2022 election will have only 64 per cent of revenue left after paying public debt. This will not be enough to repair all the crumbling infrastructure that this Bainimarama Government has presided over in roads, water, hospitals, schools, health services. Not only that, but to reduce the public debt to manageable levels (around 40 per cent of GDP) the next Minister for Economy will have to squeeze the expenditure budget even further or try to increase tax revenues, or both in order to try bring down the public debt to less than 50 per cent at most. But which item of civil service expenditure on wages and salaries will the next Minister for Economy or Finance try to squeeze? Can you imagine the angry reaction from the civil servants and unions? Which company tax can the Minister of Economy increase? Can you imagine the anger of businesses who have had it so good for so long? Which value added tax can the minister increase? Can you imagine the anger of consumers when the cost of living shoots up? I assure you that the next minister of Economy and Finance will be inheriting a poisoned chalice from the current smiling minister. Fiji’s voters are in for a tough time, because of who they voted for in 2014 and 2018 to form government. Will the 2022 Election be any different or will voters be bought again by freebies? 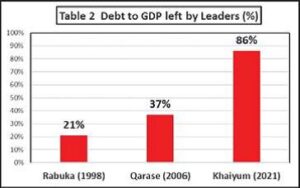 • PROF WADAN NARSEY is a leading Fiji economist and a regular commentator on economic and public matters in Fiji. The views expressed in this article are not necessarily the views of The Fiji Times.