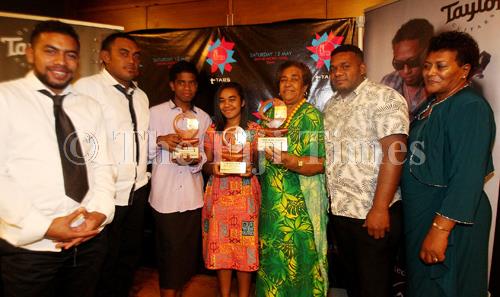 The Lote family with their awards during Tabs Investment 2018 FPRA Awards at GPH on Saturday night. Picture: JONA KONATACI

“THIS is for our father.” These were the words Etonia Lote Jr as he paid tribute to his father and composer Etonia Lote Sr after their band, the Voqa Ni Delai Dokidoki, walked away with two awards at the 2018 Fiji Performing Rights Association Music Awards on Saturday night.

Lote Sr died last month. The band won the Best iTaukei song for their hit Na Moli Koula which was composed by Lote Sr, and the Best Artist award.

“My brothers and I could only wish our father was there last night (Saturday) to see what we achieved through his songs.

“We dedicate this achievement to him,” Lote Jr said. The band has already produced 10 albums and are now working on their next album.