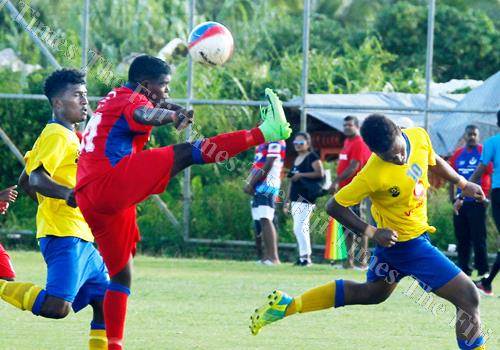 Action from the Vodafone Senior League match between Lami and Navua at the Fiji Football Academy ground in Vatuwaqa. Picture: ATU RASEA/File

ALL six teams will be in action in the Vodafone Senior League Viti Levu Zone this weekend.

In matches at the Fiji FA Academy Ground in Vatuwaqa on Sunday, April 28, 2019 Lami plays Rakiraki at 1pm after which Tailevu Naitasiri battles Navua at 3pm.

In the lone match at Lawaqa Park which starts at the same time, Nadroga battles Northland Tailevu.

After four rounds of matches, Navua leads the standings with 12 points followed by Lami on nine.

Tailevu Naitasiri is in third position with seven points.