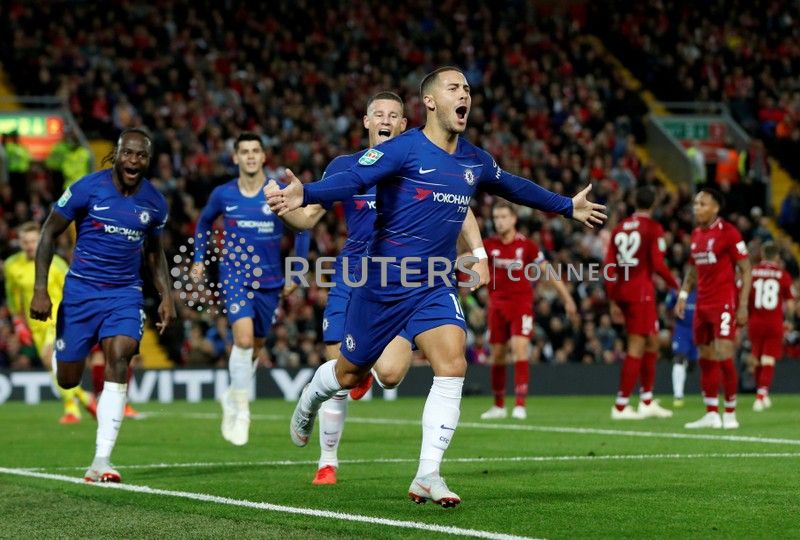 LONDON (Reuters) – Liverpool fans could be excused if they break out into cold sweats in the build-up to this weekend’s crunch Premier League clash with bogey side Chelsea at Anfield.

The rest, as they say, is history.

In first-half-stoppage time talisman Steven Gerrard, of all people, miscontrolled Mamadou Sakho’s pass in his own half; he stumbled, allowing Demba Ba to race through alone and score.

Liverpool eventually lost 2-0, threw away a 3-0 lead against Crystal Palace to draw 3-3 a week later, and ended up losing the title race to Manchester City by two points.

Chelsea fans will delight in their own version of the “Steven Gerrard song” this Sunday when their side again have the chance to sabotage Liverpool’s title ambitions.

With Manchester City able to go a point clear if they beat Crystal Palace 24 hours earlier in London, Liverpool know a only a first home win over Chelsea for seven years will take them back to the top of the table.

Should Juergen Klopp’s side take the three points in what is the toughest of their remaining five fixtures, their fans will start to truly believe their long wait for the title is coming to an end.

Champions City, who have a game in hand over their title rivals, are still to play Manchester United and Tottenham Hotspur in their run-in.

Maurizio Sarri’s Chelsea have been unpredictable this season, but after Eden Hazard’s superb performance in a 2-0 defeat of West Ham United on Monday, they will go to Anfield in the top four and eyeing Champions League qualification.

Such has been the rivalry between the clubs since Liverpool’s Luis Garcia scored what former Blues boss Jose Mourinho described as the “ghost goal” in the 2005 Champions League semi-final, there is nothing Chelsea’s fans would enjoy more than stalling the Anfield club’s title bid again.

Liverpool’s recent home record against Chelsea is lamentable, losing three and drawing five of the last eight at Anfield, with the 2014 defeat the most painful.

City suffered only their second loss in their last 24 games in all competitions when they went down 1-0 to Tottenham in the Champions League quarter-final, first leg on Tuesday — the same night Liverpool beat Porto 2-0 to move towards the semi-finals.

Pep Guardiola’s side have begun to show a few signs of fatigue as their pursuit of an unprecedented quadruple reaches its climax.

They will need no reminding that Palace produced one of the most stunning results of the season at the Etihad Stadium in December when they won 3-2 thanks in no small part to a wonder strike by Andros Townsend.

City will hope to have Bernardo Silva fit after he was ruled out against Tottenham through injury.

The fierce battle for third and fourth spots also continues this weekend with fourth-placed Tottenham hosting relegated Huddersfield at their new stadium — having won their first two matches there without conceding.

Tottenham, who look certain to be without injured striker Harry Kane, possibly for the rest of the campaign, have 64 points from 32 games, two behind Chelsea having played one game less.

Arsenal, who visit FA Cup finalists Watford on Monday, have 63 points, while Manchester United (61) take on West Ham at Old Trafford on Saturday.

In the battle to escape relegation, third-from-bottom Cardiff City travel to Burnley, while Southampton, five points above them, host Wolverhampton Wanderers.