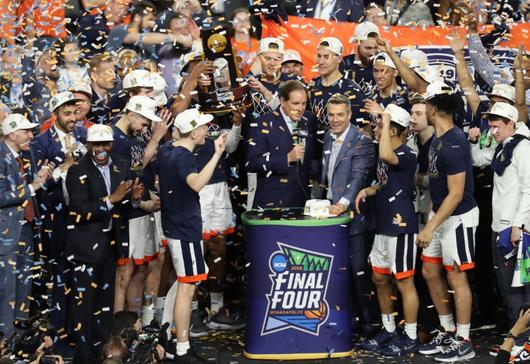 De’Andre Hunter scored 27 points, Kyle Guy added 24 and Ty Jerome finished with 16 for the Cavaliers, who won their first basketball title one year after being eliminated in the first round of the NCAA Tournament by 16th-seeded UMBC.

Virginia claimed a 77-73 lead with two free throws from Jerome, and Texas Tech’s Brandone Francis missed a corner 3-point attempt with 33 seconds left in overtime. Guy soon was sent to the line, where he padded the advantage to 79-73.

Virginia went 12 of 12 from the free throw line in overtime.

Hunter had earlier drained a corner trey as Virginia reclaimed the lead, 75-73, with 2:09 left in overtime. Guy previously made a pair of free throws for the Cavaliers to keep it a one-possession game.

Matt Mooney, who hit a 3-pointer on Texas Tech’s previous trip, fought into the lane but was trapped before fading to his right for a jumper that kissed virtually every part of the iron and dropped home for a 73-70 Texas Tech lead. Virginia then went on an 11-0 run.

Neither team dropped the gloves for the final 10 minutes of regulation or overtime.

With 14 seconds left in the second half, Hunter made a 3-pointer — from nearly the same spot on the floor as the OT bucket — on a feed from Jerome, who had eight assists.

Culver gave Texas Tech a 66-65 lead with 35.1 seconds left in regulation. He attacked the middle of the lane and spun to his left, double clutching before putting the ball off the glass with his left hand over Hunter, the ACC Defensive Player of the Year.

Jerome missed a runner off the left side of the rim at the other end, sending Norense Odiase to the line after he was fouled collecting the Jerome miss. Odiase made both foul shots.

Hunter stuck a jumper over Culver for a 63-61 lead. Culver’s answer fell short and Guy connected on a layup, but Virginia’s four-point lead went to one with sophomore Davide Moretti’s third triple at the 1:31 mark.

Odiase converted an and-1, tying the game at 59 with 3:28 remaining to cap an 8-0 run. Virginia led by as many as 10 in the second half with Hunter and Jerome carrying the offense, but the Red Raiders’ bench — sparked by Francis — helped Texas Tech stay afloat.

Mooney looked for his shot and connected with a long trey to pull Texas Tech within 59-56 with four minutes left.

Before bagging a step-back, 16-foot fadeaway of his own, Jerome zipped a right-handed pass from the block to Guy in the left corner for an in-rhythm 3-pointer to push Virginia ahead 53-43 at the 10-minute mark.

With Texas Tech’s primary options in a funk, Francis was a one-man gang for critical stretches and Culver heated up in the second half. Francis finished with a team-high 17. Culver, who missed eight shots before one went down, and Moretti had 15 apiece.