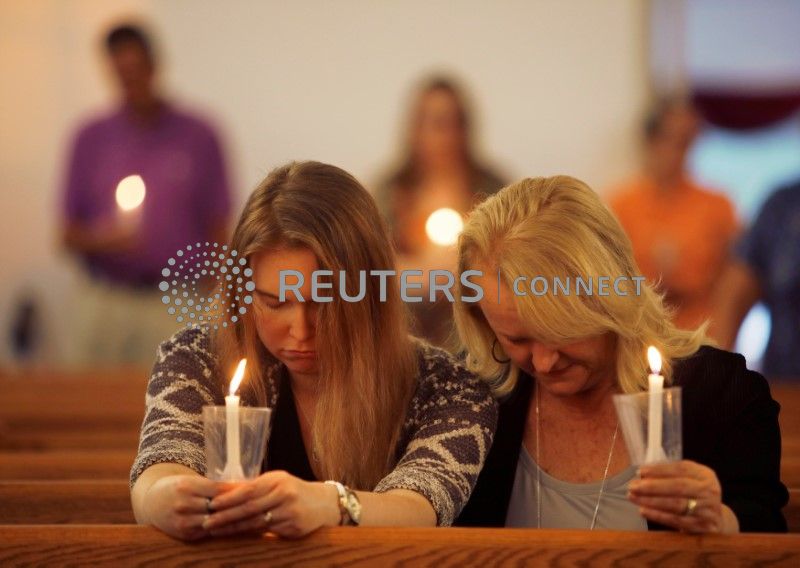 Laura Goodman and her mother Peggy Harrison hold candles at a prayer vigil for the victims of a Friday shooting incident in Virginia Beach, Virginia, U.S. June 1, 2019. REUTERS/Jonathan Drake

VIRGINIA BEACH, Va. (Reuters) – The gunman who killed 12 people at a Virginia Beach municipal building before dying in a shootout with police was identified on Saturday as a disgruntled city engineer and co-worker of most of the victims.

All but one of the victims from Friday’s mass shooting in the coastal resort community were employed by the city, officials said, while the other was a contractor seeking a permit. Four people were wounded.

The gunman, DeWayne Craddock, had worked for the city’s public utilities department for about 15 years, Virginia Beach Police Chief James Cervera said at a news conference. He declined to comment on any possible motive.

“These are 12 individuals who came to work … thinking they would go home in the evening, and they didn’t return and it left a tremendous void in their families and in our community,” Virginia Governor Ralph Northam said at a news conference.

It was the worst mass shooting in the United States since November 2018, when a dozen people were slain at a Los Angeles-area bar and grill by a gunman who then killed himself.

Bodies were found on all three floors of the Virginia Beach building and in a car parked outside, according to authorities.

Cervera described the crime scene as “horrific” and said that investigators who spent the night inside the building endured a “physical, emotional and psychological toll.”

Police said the gunman was armed with two .45 caliber pistols and used an employee pass to enter secure areas before firing “immediately and indiscriminately” on victims while reloading with multiple extended ammunition magazines.

At least one of the pistols was fitted with a “sound suppressor,” police said. Both handguns were bought legally by the shooter within the last three years, Ashan Benedict, a special agent at the U.S. Bureau of Alcohol, Tobacco, Firearms and Explosives, told the news conference.

Two more firearms were found at the home where Craddock lived alone, he said.

After the attack began, two police supervisors from a building across the street arrived within minutes, Cervera said, and they were quickly joined by two police dog-handlers. The suspect was killed after a lengthy gun battle.

A number of vigils and commemorations are planned, including a memorial service the city is organizing for Thursday evening.

The bloodshed unfolded at Building Two of the municipal center complex on Friday afternoon as workers prepared to leave for the weekend. Some survivors recounted how they cowered in fear after stacking desks against office doors as makeshift barricades.

Three of the wounded victims were in critical condition and a fourth was in fair condition at local hospitals, said Julie Hill, a spokeswoman for Virginia Beach.

A police officer who was shot but saved by his ballistic vest has been treated and released, she said.

Cervera said he would only name the gunman once, and hereafter refer to him just as “the suspect.”

According to local media, Craddock was 40 years old and had no serious criminal record.

He served in the Virginia National Guard from 1996 to 2002, and was assigned to a Norfolk-based battalion as a cannon crew member, a guard spokesman said, adding that Craddock’s records do not indicate any overseas deployments.

Cervera said 40 agents from the Federal Bureau of Investigation are recovering evidence at the crime scene, which lies in a complex of office buildings several miles inland from the town’s popular seashore, situated on the Atlantic coast at the mouth of the Chesapeake Bay.

Virginia’s most populous city has roughly 450,000 year-round residents. Its police department had trained for a mass shooting, and even planned to hold a citizen workshop on active shooter situations on Saturday. The workshop was canceled.

On Saturday, Melissa Millemon, a daycare worker, and Tina Devault, who works for a heating and cooling company, were among local residents who came to the shooting site to lay flowers, American flags, and other tributes to the victims.

Both said they either knew someone who had been killed or had a friend or acquaintance who knew one.

“One of my friends lost her neighbor,” Millemon said, adding that a member of the local softball community was also killed.