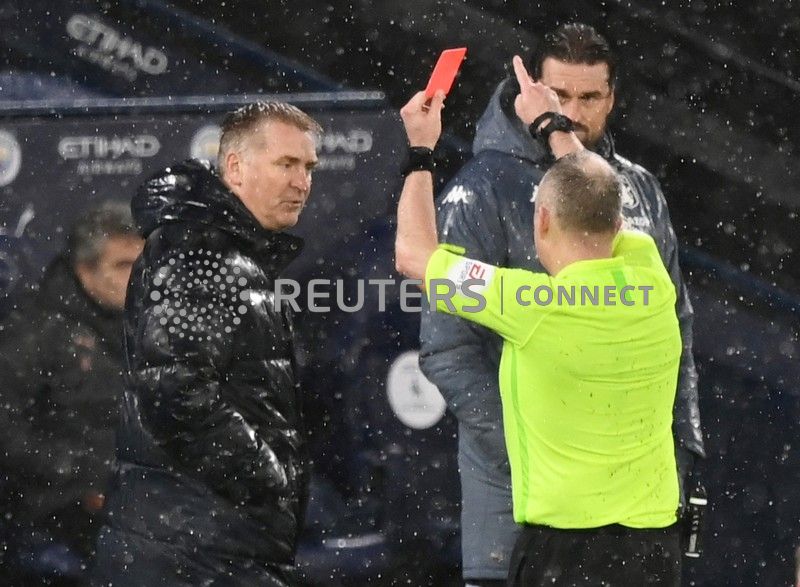 (Reuters) – Aston Villa manager Dean Smith said on Friday that he “reluctantly” accepted an FA charge for insulting the match officials during a 2-0 loss to Manchester City earlier this week.

Smith had been charged for allegedly using abusive language towards referee Jon Moss, who showed Smith a red card on the touchline in Wednesday’s match.

“I will reluctantly accept it but I will accept the charge for insulting the officials, I certainly didn’t abuse them and that will be the end of the matter,” Smith told reporters ahead of Saturday’s Premier League home game against Newcastle United.

“I don’t regret asking the referee if he had juggling balls for Christmas. That’s my way of dealing with the situation, with a touch of sarcasm.”

The FA said later on Friday that Smith was handed a one-match touchline ban and fined 8,000 pounds ($10,942.40) after admitting the charge.

Smith was furious following Bernardo Silva’s opening goal, which came about after his City team mate Rodri came back into play from an offside position to provide the assist, saying it was an “obscure law” that not many were aware of.

“It just shows you when there are different interpretations of a law how different it can be because we’ve had two situations on the same night, two games in quite a unique situation,” Smith added.

“If they don’t change that law I’m sure everyone can see where that law can go… That’s the first time it’s happened in my 500 games of managing.

“We have moved on. The next game is Newcastle and we’re looking forward to that.”

Struggling Newcastle, 15th, have not won any of their last nine games in all competitions and Smith said he wanted to ensure Villa extended that run.

“They have good players, and we will be very wary of them,” he said. “We have to make sure that our game isn’t the one where they get out of the rut that they are in at the moment.”