Villagers left behind – People up in arms over no internet access 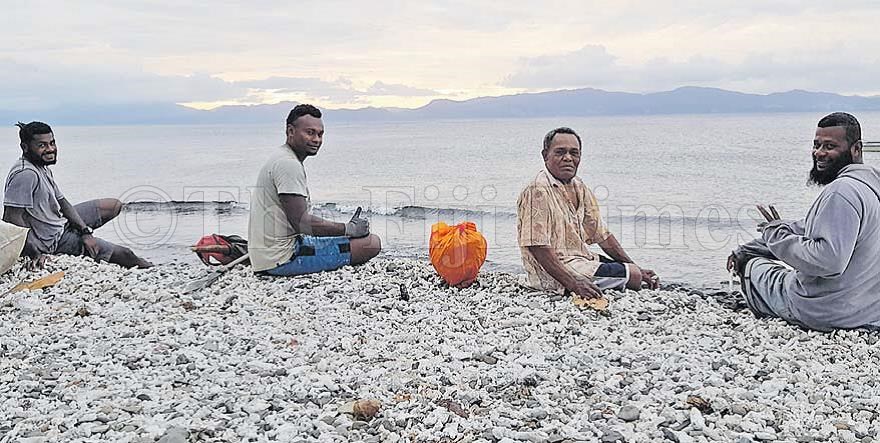 These Tunuloa villagers have to sit by the beachside and look for network. Picture SERAFINA SILAITOGA

A lack of phone and internet connectivity in rural Cakaudrove is hurting families, damaging small farming businesses and resulting in parents relocating to ensure their children get an education, villagers say.

Villager and community worker Lote Saro said 1000 people in and around Tunuloa and Natewa were affected.

Despite promises from mobile phone companies and the Government about improving digital access, villagers in Cakaudrove are still left behind.

When a team from this newspaper visited Cakaudrove recently, they were told the absence of internet connectivity in districts of Tunuloa and parts of Natewa had resulted in many students missing out on online classes while others were being forced to move away from their communities for the sake of their education.

“With the pandemic we’re facing, some parents opted to move to their families closer to town area so their children could access online studies,” said Ms Saro.

Ms Saro said children whose parents chose to stay in the village did not have access to online studies and in most cases, their parents could not afford to send them to the town area.

“So the situation is real, the struggle is real and we hope something is done about it and some people have to take desperate measures to access the mobile phone network, including walking distances to high vantage points with better line-of-light to mobile phone transmission towers.”

Ms Saro said the absence of connectivity in the area was not a new issue. Villagers struggled to communicate with their loved ones living around the globe.

“We have been without network for many years ever since mobile phones and its technology arrived in Fiji and during emergency cases, we can’t call for the ambulance if we have no vehicle to carry the ill,” he said.

Last year, during the Global Citizens Dialogue, then acting permanent secretary for Communications and Director-General Digital Government Transformation, Cybersecurity and Communications Tupou’tuah Baravilala told guests that 95 per cent of Fijians had access to internet connectivity.

In June, Vodafone announced remote businesses would now benefit from affordable access to internet, delivered by Vodafone via satellite.

These services are intended for remote and rural communities beyond the reach of traditional network coverage.

At the time, Vodafone’s chief commercial officer Ronald Prasad said in today’s digital age, it was important that every individual had access to internet.

Despite raising the lack of mobile phone and internet access many times during village, district and provincial meetings, Tunuloa elder Mateo Maitubalevu told The Fiji Times nothing had been done to improve their network access.

“When we don’t have internet access, we feel more isolated because we are not on track with the changes around us and we only get to find out when we go into town,” he said.

“Most of the time we use the communication channel of our forefathers, ‘the coconut wireless’, to get information about certain issues,” said Mr Maitubalevu.

“But this is not good because there are times when the wrong information is given and it affects us a lot. For example, someone will call from town to relay a message that a group of government officials or company reps will visit the village on this particular day, date and time.

“The same message is then passed to another villager to let other villagers know and if they relay the wrong date and day of the meeting, then we won’t be able to access the services of that group” Mr Maitubalevu said.

The lack of connectivity has affected health care in rural Cakaudrove and support for patients in need of urgent or more sophisticated medical services.

Nailou villager and women’s group president Maria Iowana said there was only one health centre in the province — at Natewa — and patients were often referred to Savusavu Hospital for further treatment.

“When this happens we can’t contact our family members in the villages to let them know that we have been referred to the bigger hospital,” Ms Iowana said.

“We can’t even contact them to tell them to prepare our clothes, food and other things we need to take to the hospital in case the doctors admit us.

“So, what we do is pass the message to the villagers returning home and so we usually receive our clothes and other items the following day after getting admitted.

“Nailou Village is at an added disadvantage because it has no road access but, as in other villages in the area, with enough time, fitness or fuel, some phone coverage is possible.

“If we want to contact our family members, government officials or companies in town, we need to travel out to sea or climb a nearby mountain to access the network,” she said.

The districts of Natewa and Tunuloa have“big time” kava farmers who have also fallen  victim to having no phone or internet connectivity.

Over the years, these farmers have relied on each other to secure customers for their products or have simply lived on faith and prayers hoping that when they got to town, some people would buy their kava.

Alusio Ray, a kava farmer in Natewa, has described the situation as a challenging one because farmers are affected when no customers are secured.

“We can’t call anyone in town because we don’t have any connection so we send messages through other villagers travelling into town to look for customers,” he said.

“If they return to the village then good for us because they can tell us what transpired but if they don’t then we’re stuck and we need to pray and ask God to prepare some customers for us.”

While it has worked out for some, it hasn’t for other farmers, so they lose out financially.

“But most times because we have not been able to reach our customers, farmers sell for a lower price and receive between $300 and $400 and this is a huge loss.

“So, sometime we come to town a week before, talk to customers and return a week or two weeks later with the kava but travelling expenses is costly.”

“Apart from grog we also sell sweet potatoes — we go into town with the hope of finding good customers, sadly that hasn’t been the case,” he said.

“Sometimes we take bags of sweet potatoes and bring back a bag or two because no one buys the produce and that’s why we need this mobile or internet connection so we can organise buyers.

“It’s difficult because we pay a lot for transport so instead of selling and earn an income to pay for transport back to the village, we return with little or no income.”

Villagers in rural Cakaudrove are wondering why, despite discussing their mobile phone and internet connectivity issues with government officials and mobile companies, they still have no service or an inadequate one and they want to know when they will be connected.

The Fiji Times put questions to Vodafone Fiji Ltd and Digicel Fiji Ltd more than a week ago — they remain unanswered.

Questions sent to the Minister for Communications and Attorney-General Aiyaz Sayed-Khaiyum did not get a reply but a few days ago he said at the opening of the UNCDF satellite office in Suva that about 24 sites on Vanua Levu were expected to be completed by the end of this month.

This, he said, was expected to provide better connectivity to people including schools, health facilities and surrounding communities.