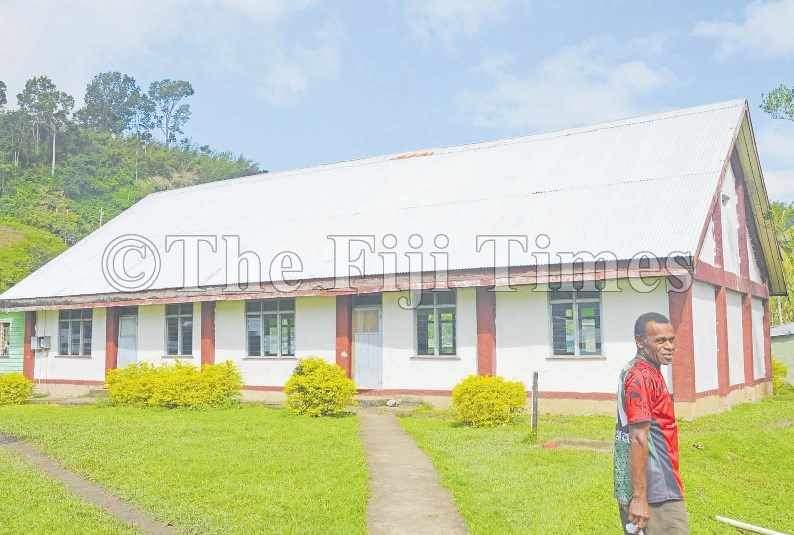 IN 1995, men from Saliadrau Village in the interior of Namosi left their families to work in sugarcane fields and pine forests in the Western Division.

The work, which took them away from their loved ones, lasted about six months and the monies earned was used to help fund the construction of the St John Mary Vianney Church.

Others organised a marathon from Vatukoula to Suva — and it was all geared towards the construction of their house of worship.

The village, located in the district of Wainikoroiluva, has a population of close to 400 — with the majority being members of the Catholic faith.

Saliadrau villagers earn their living with income derived from the sale of dalo and yaqona, which are sold to exporters and middlemen who supply the Suva and Navua markets.

The church is named after St John Mary Vianney who was born a peasant in Dardilly, France in 1786.

It was during the French Revolution and it was illegal for Catholics to attend mass at the time.

But the Vianney family travelled long distances every Sunday to worship and pray in secret.

After the revolution ended and the Catholic religion was again allowed to be openly practised, St John felt drawn to the vocation of the priesthood.

St John was canonised in 1925 and is the patron saint of priests according to the Catholic Church.

During a recent visit to the interior of Namosi, The Fiji Times spoke to 47-year-old Petero Naivalu who shared the struggles his forefathers had to endure to construct the St John Mary Vianney Church in the heart of Saliadrau Village.

It took the villagers five years to fully complete construction of the church which falls under the auspices of the Namosi Parish.

The total cost of the project was in excess of $50,000 and the church was designed to cater for about 1000 during mass.

In 1999, it was officially opened by Archbishop Petero Mataca — the former head of the Catholic Church in Fiji.

Mr Naivalu said a carpenter from Matuku in the Lau Group helped the villagers construct the church.

Before construction of the church, he said mass was conducted inside a thatched bure which was later destroyed during a natural disaster.

“Our elders decided that we construct a new church, after the thatched bure was destroyed,” Mr Naivalu said.

“We didn’t have anything with us during the early stages to start constructing the church.

“So villagers started with small fundraising activities for the groundbreaking ceremony.

“Then from there, our forefathers started looking for other ways to continue with the construction.”

He said a group of men from the village went to work at the pine station in Lololo, Lautoka, while another group went to work in the sugar fields in parts of the Western Division.

“So, that’s why a group of men went down to Nadi to work the sugarcane fields, while the other group went to work at the pine station in Lautoka.

“In some families, fathers and their sons were in the Western Division working the sugarcane fields.

“The money we earned was sent to the village to purchase the construction materials.

“Another group of men organised a marathon from Vatukoula to Suva in their efforts to raise funds.

“Men worked in scorching heat and some even sacrificed family income earned from selling dalo and yaqona to give to the church.

“The women in the village cooked for the men who were constructing the church, so it was a whole community affair.”

He said the men carried construction materials on horseback, trekked rugged terrain and crossed a river to  get to the village from the main road.

“When the church was finally completed in 1999, villagers cried their hearts out.

“It had been a long and challenging process and to see the completed structure before us was overwhelming.

“Some of the pioneers have now passed on and we are here to carry on their legacy.

“The church is like our safe haven and this will be used by the future generations of this  village, some of whom have
moved on to urban centres across the country and overseas.

“Our children have started to bear the fruit of our forefathers’ hard work and sacrifice.

“Some now have good jobs, education and have become very successful.”

Mr Naivalu said Saliadrau villagers were committed Catholics and mass was always respected in the village.

In a report published in The Fiji Times on February 9, 2020, it was in 1901 when the Tui  Namosi, Ratu Matanitobua,
angrily withdrew his people from the Methodist Church after a quarrel with his wife and the  Fijian Methodist preacher of Namosi, he invited ambitious French missionary Father Pierre Joseph Emmanuel Rougier from
his station at Naililili in the delta of the Rewa area to receive “Namosi’s submission to Rome”.

It was reported that more than 2000 people in the former Methodist stronghold of Namosi  converted to Catholicism and followed their chief.

Tui Namosi became a Catholic and he embarked on spreading the faith not only within his district but to the neighbouring Naitaisiri Province.