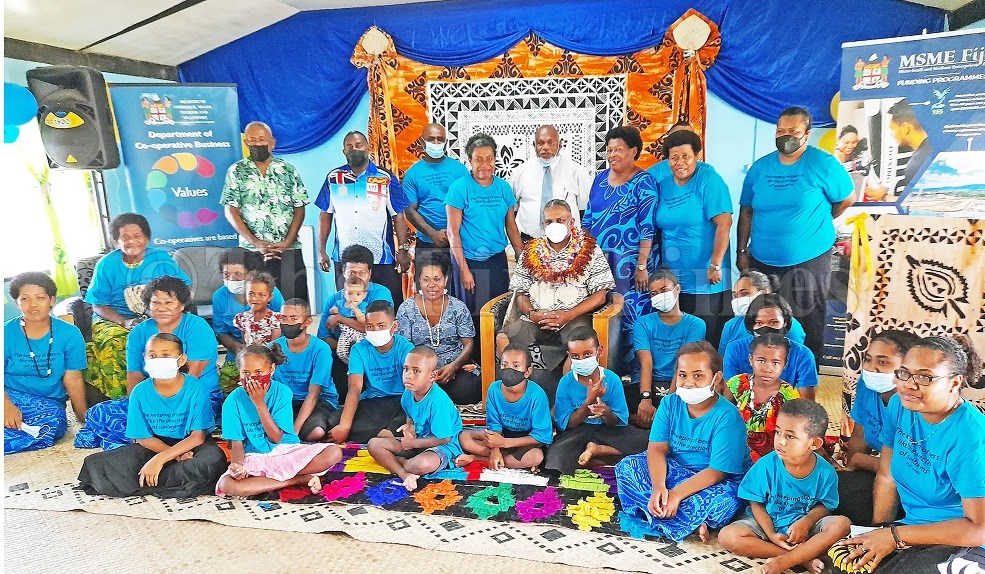 Minister for Commerce, Trade, Tourism and Transport Faiyaz Koya (with garland) poses for a photo with the villagers of Mateinoco during the handover of honey boxes under the IHRDP Project. Picture: RAMA

The mataqali of Koroitose has ventured into bee farming in order to create a sustainable living given the impacts of climate change.

“The reason why because of the effects of climate change and also like the initial working capital, like we have a little bit of money with us, which can help us to start and we also look at the rate of return from beekeeping.

“And also like the with the effect of climate change in our area like we didn’t have much land so the little piece of land is good for beekeeping, like in one small areas we can put around 40 hives.”

The mataqali is set to produce not only honey from their bee farm but also create bee boxes and queen bee raring.

Mr Tubuna said the demand in the local market was very high as people were opting for a much healthier option for such as honey which had natural sweeteners.

“Like our aim right now is to have 500 double hives, in the next five years, as soon as we have that or even more than 100 hives, then we could be able to export.”

He said with exporting there was a need to have a continuous supply which they could not meet or else they would have to buy from other suppliers to meet the demand.

Mr Tubuna said there were plans in place to provide technical training to the women and youth of the mataqali on the livelihood and bee raring.

The Minister for Commerce, Tourism, Trade and Transport, Faiyaz Koya also handed over the bee boxes, equipment and the co-operative registration certificate to the chairperson of the Mataqali Koroitose Cooperative.

He said the apiculture industry was one of the upcoming industries under the agro-business sector.

“When the community contributes towards a project, there is ownership and increased responsibility to achieve the desired results — to have the project work.”

He added that Mataqali Koroitose was now registered as a co-operative business as this formalisation would ensure operational structure, strengthen governance and better position itself to easily access more finance, technical expertise and trainings.

“This will also give you the opportunity to enter into contracts, expand your operations to value-adding and hopefully one day — become exporters,” he said.

Mr Koya said the domestic market would be a great start for Mataqali Koroitose to commence its business.