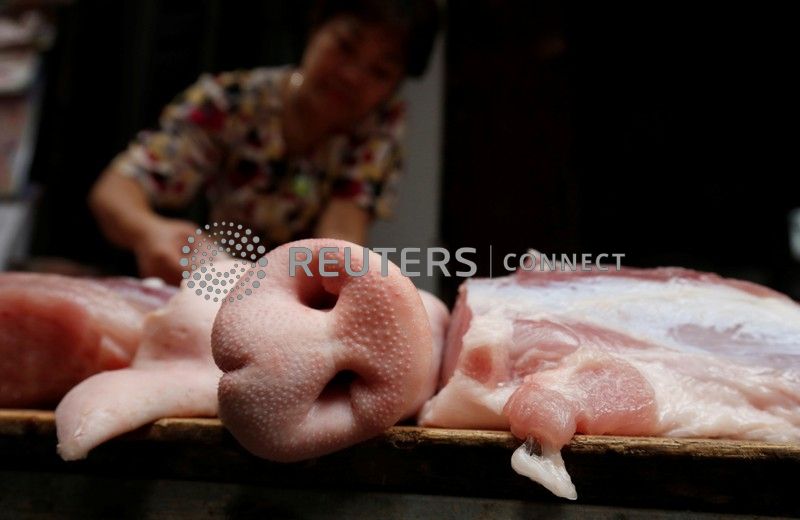 FILE PHOTO: Pork is displayed for sale at a market in Hanoi, Vietnam February 19, 2019. REUTERS/Kham

HANOI (Reuters) – Vietnam culled a further 500,000 pigs over the past two weeks to tackle an oubreak of African swine fever, taking the total killed so far to 1.7 million, or 5% of the country’s herd, the agriculture ministry said on Monday.

Pork accounts for three-quarters of total meat consumption in Vietnam, a country of 95 million people where most of its 30 million farm-raised pigs are consumed domestically.

The virus, first detected in the Southeast Asian country in February, has spread to 42 of the country’s 63 provinces, the agriculture ministry’s Livestock Production Department said in a statement on its website.

“The African swine fever outbreak is the most dangerous and costly of its kind in the husbandry industry of Vietnam,” agriculture minister Nguyen Xuan Cuong said in the statement.

“Though the virus first appeared nearly 100 years ago, there has been no vaccine and no medicine for treating the disease”.

China, the world’s largest pork producer, which has also been hit by the virus, said on Friday it will start work on clinical trials of a vaccine for African swine fever, which is fatal to animals but not harmful to humans. [L4N230184]

Cuong said it is difficult to contain the outbreak given that the virus remains dormant in the environment for a long time and can spread through complex and varied means.

Earlier this month, Vietnam said it will mobilize its military and police forces to help combat the outbreak.

The United Nations Food and Agriculture Organization (FAO) in March advised Vietnam to declare the swine fever outbreak as a national emergency.