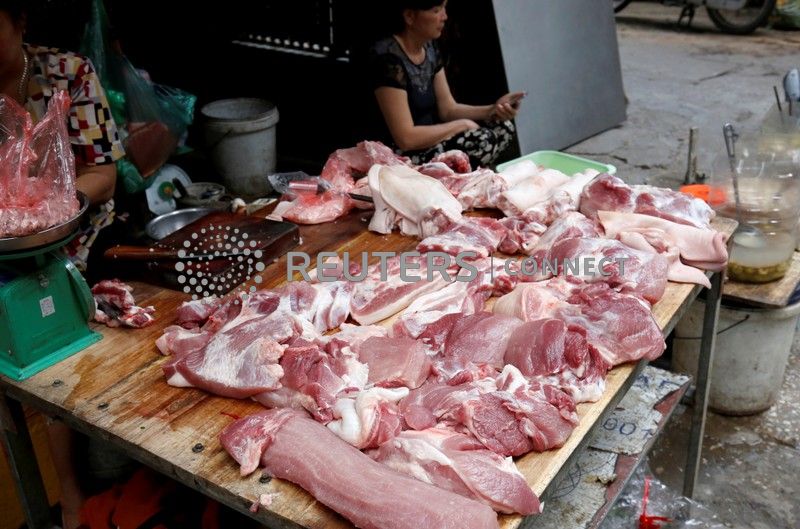 Pork is displayed for sale at a market in Hanoi, Vietnam February 19, 2019. REUTERS/Kham/File Photo

HANOI (Reuters) – Vietnam said on Friday it has culled 2 million pigs in a bid to curb an outbreak of deadly African swine fever and called on the entire nation to join the fight against the rapidly spreading disease.

The virus had spread to 48 of the country’s 63 provinces, agriculture minister Nguyen Xuan Cuong said at a meeting of parliament, upping the number of pigs culled from 1.7 million less than a week ago.

Pork accounts for three-quarters of total meat consumption in Vietnam, a country of 95 million people where most of its 30 million farm-raised pigs are consumed domestically.

“This is an extremely dangerous disease … and we have to take the fight seriously,” Cuong said. “The whole political system has to get engaged in the fight.”

Cuong also called on local consumers not to turn their back on pork consumption and encouraged businesses to stockpile pork in anticipation of shortages in the second half of the year.

“We shouldn’t expand the pig herd at the moment, but instead, shift the focus on expanding cattle, poultry and aquaculture production,” he added.

Vietnam’s pork industry is valued at around 94 trillion dong ($4.0 billion), accounting for nearly 10% of the country’s agricultural sector.

Cuong said the outbreak is threatening to expand to the rest of the country as the virus remains dormant in the environment for a long time and can spread through complex and varied means.

African swine fever was first detected in Asia last August in China, the world’s largest pork producer, where Rabobank has estimated up 200 million pigs could be culled or die. Other analysts do not expect such a large impact.

South Korea said on Friday the disease has been detected in North Korea near it’s border with China. [L4N2371LL]

Earlier this month, Vietnam said it will mobilise its military and police forces to help combat the outbreak.

The United Nations Food and Agriculture Organization (FAO) in March advised Vietnam to declare the swine fever outbreak as a national emergency.