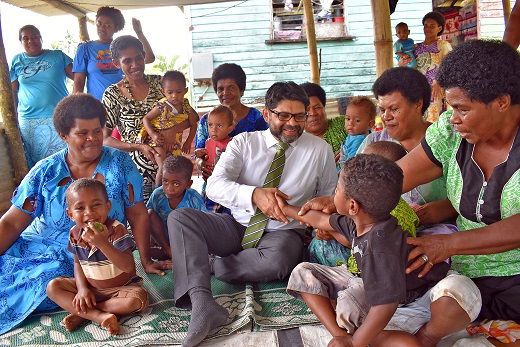 Attorney- General and Minister for Economy Aiyaz Sayed- Khaiyum meets with women and children after the launch of Global Commission and Adaptation Flagship Report at Naveicovatu village in Wainibuka, Tailevu on Tuesday, September 10, 2019. Picture: JONACANI LALAKOBAU

VILLAGERS of Naveicovatu Village in Tailevu are worried that one day they will have to leave their village to relocate elsewhere because of soil erosion.

Like so many other climate vulnerable communities, the village had to adapt to new climate threats.

The river bank erosion has directed floodwaters from the Wainibuka River into their homes.

However, this will now be a thing of the past for them thanks to an innovative, natural based solution.

Attorney-General and Minister for Economy Aiyaz Sayed-Khaiyum, while launching the global commission and adaptation flagship report in the village yesterday, said the erosion from the river bank would now be halted with 600 metres of vetiver grass.

He said this grass was innovative as it removed water pollutants and promoted soil and water conservation. “We’re looking at replicating this project’s success in 22 other villages along the Wainibuka River,” he said.

“The success of this project has made Naveicovatu Village a model for climate vulnerable communities around the world.”

Village headman Sitiveni Uluinavucu said he was thankful to the government for its assistance.

Mr Uluinavucu said soil erosion had now stopped and they were looking at planting more of this vetiver grass.