Verevere good: Sons return to save way of life and the planet 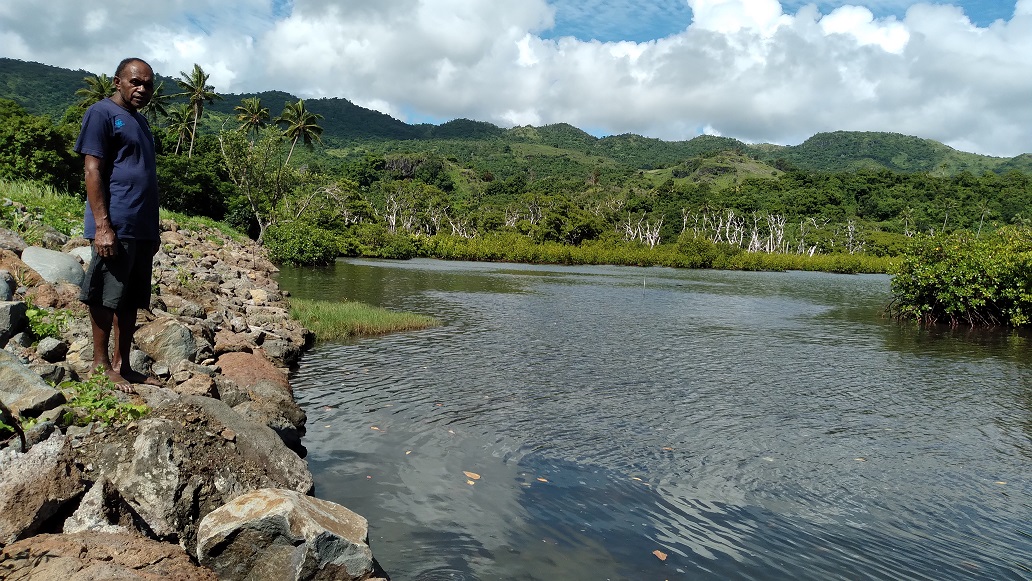 Kuliniasi Qorowawi on eht newly-built stone seawall, close to where substance believed to be oil was found. Picture: ILAITIA TURAGABECI

As the first cyclone of the season arrived in the South Pacific this month, a village hard hit by the infamous Category 5 Severe Tropical Cyclone Winston in 2016 has strengthened its defence against climate change and welcomed back its youth in a renewal of a pledge to embrace stewardship of the Earth.

The youth of Verevere Village, who had moved to urban centres for better opportunities after Winston, began moving back for the festive season to the village, which was pulverised by destructive winds travelling at 175km per hour on January 26, 2016.

Catching the populace of Fiji’s main island – Viti Levu – by “surprise” after defying projected paths to make landfall several kilometres from Verevere at Dawasamu, Winston raised the sea several metres to smash into villages along the coast, from Dawasamu to Ra.

Where the waves didn’t reach and destroy, the winds did the rest, taking roofs off and whatever stood in its way at Verevere.

Winston had arrived in Fiji waters and appeared to be leaving towards Tonga but it turned back.

After turning northeast, Winston stalled to the north of Tonga.

Due to a change in higher level steering, the storm drifted back to the west.

In the process, Winston again rapidly intensified, reaching Category 5 intensity on both the Australian tropical cyclone scale and the Saffir–Simpson hurricane wind scale.

The storm passed directly over Vanuabalavu, where a national record wind gust of 306 km/h was observed.

All but three homes were left standing when Winston passed over Verevere and tracked away 48 hours later to the neighbouring island kingdom.

Waves swept homes into the Toba Basaga, a bay along the Nakorotubu coast in Ra.

As they picked up the pieces and rebuilt at Verevere, most of the young men and women relocated for work to Nadi and elsewhere to help their families rebuild.

Five young men returned home for Christmas with their partners and were encouraged to follow teachings of Jesus Christ and embrace love for the environment their forefathers had lived with in harmony to pursue their place in
heaven.

Last Christmas was a joyous occasion for the elders of Verevere as they watched the next generation prepare to build homes and their new families.

This, as the village completed a new seawall to protect it from the encroaching sea.

Before Winston arrived, they were already feeling the impacts of climate change.

“Before, sometimes, we had to swim to get to the kitchen outside or go to church,” said village elder Maika Masinameke.

“It’s a great feeling to see the next generation come home to settle and see this village through storms of life and reinforce good stewardship for all things God has gifted us with, our vanua, our traditions, culture, family, and most importantly, God as the focus.”

The seawall was built by Fiji’s Ministry of Waterways after the villagers approached its then minister, Mahendra Reddy, after a visit to the coast.

“It’s no use talking about climate change if we ourselves don’t follow Christ’s teachings of love, tolerance of others, forgiveness and love and protection of our planet.”

“If we want to achieve God’s promise for our place in heaven, we must embrace all that he had instructed us to do, and that includes protecting our environment.”

The Government also built a dam to supplement another built by Verevere’s forefathers.

“We, the occupants of this planet that God gifted us with, brought this upon ourselves.

Mr Masinameke said it was all good to take the stewardship message to the world through big conferences such as COP26 and elsewhere but this was not enough.

“Now, it’s time to repent and give birth to renewal of our priorities and our lives,” he said.

“This commitment for the environment is needed at all levels. Government to every coastal dweller.”

Kuliasi Qorowawi Junior sent his fiancée and daughter in the lead to Verevere and joined them for Christmas to celebrate with family and plan the completion of his new home and prepare for his wedding.

His fiancee, Olivia Feoko, said she was happy to be in her new village and be part of a renewed pledge to improve their life, basing it on the wisdom of old and respect, trust and faith in God and his plans for them.

“I’m happy that our young family will have the chance to live a better life.

“Kuli is committed with the work he is doing in Nadi and that occasional time away for a livelihood is a small sacrifice we are willing to make to set up life here.”

The people have welcomed me and I’m happy to be part of this renewed faith and journey in life.”

Mr Qorowawi Junior said he was glad he had moved his young family to the village.

“It’s comforting to know they’re in a good safe environment while I continue working for a living,” he said.

Elders said they need to restore some old traditional practices to ensure the protection of their environment.

Loss with the onslaught of development, deforestation and introduction of new tree species, villagers have witnessed the disappearance of native birds, where native hardwood trees used to be.

Kuliniasi Qorowawi Senior, another village elder, said some native bird species, such as the bunako, could no longer be seen around the forests around the village.

“We have felled most of our native trees, the vesi, dakua and other hardwood. The new foreign species that were introduced don’t attract our birds anymore.”

Before we could hear their cries and calls around Verevere, now we don’t.”

But the new tree species were meant to be planted,” he said.

“Those mahogany that Winston brought down, we ripped to rebuild our homes after Winston. They were about 17 years old when we cut them.”

Mr Qorowawi Senior said Fijians must restore their environment to what it was when their forefathers lived there.