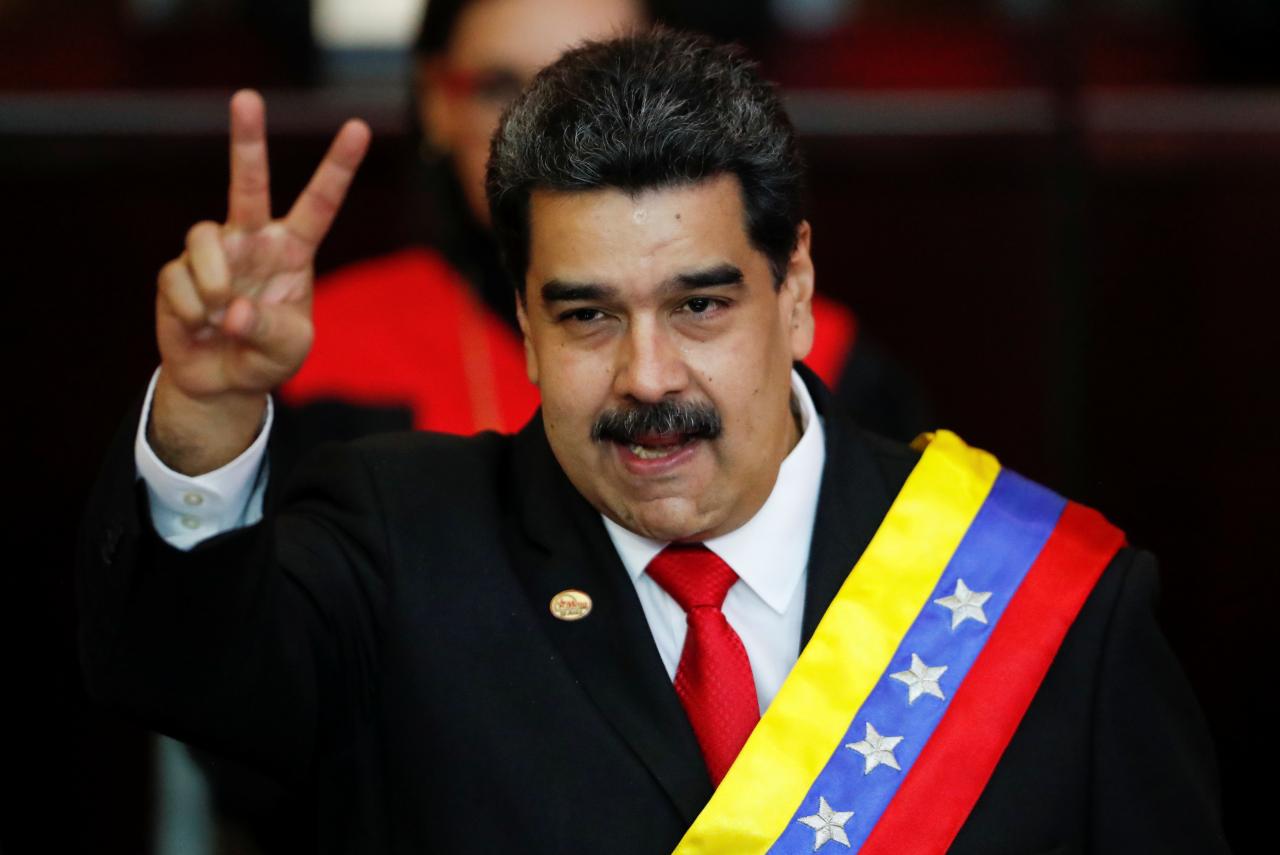 Venezuelan President Nicolas Maduro gestures after receiving the presidential sash during the ceremonial swearing-in for his second presidential term, at the Supreme Court in Caracas, Venezuela January 10, 2019. REUTERS/Carlos Garcia Rawlins

CARACAS (Reuters) – Venezuelan President Nicolas Maduro started a second term on Thursday, defying critics in the United States and Latin America who called him an illegitimate usurper of a nation where economic chaos has wrought a humanitarian crisis.

The country’s pro-government Supreme Court, which has largely supplanted the opposition-run Congress, swore him in following a welcome with a symphony orchestra and cheering supporters waving miniature yellow, blue and red Venezuelan flags.

The ceremony contrasted with the harsh realities that face the former bus driver turned socialist leader, including hyperinflation, severe food and medicine shortages and an exodus of millions of citizens.

Before he had even completed his inaugural speech, the United States decried a “usurpation of power,” and Paraguay announced it was cutting diplomatic ties – highlighting the growing isolation that Maduro will face.

“A new world has risen up that refuses to be controlled by the imperial and hegemonic orders of a single nation or its satellite countries,” Maduro said following his swearing-in.

“That’s the rallying cry of our revolution to the peoples and governments of the world.”

Supreme Court Chief Maikel Moreno dedicated nearly 20 minutes to explaining why Maduro was not being sworn in by Congress, which the ruling Socialist Party has systematically ignored since the opposition took control of the body in 2016.

Opposition leaders have portrayed the inauguration as the moment at which Maduro will be internationally branded a dictator, following a widely boycotted 2018 election that many foreign governments described as a farce.

“We call on the armed forces, the majority of men and women in uniform who refuse to be corrupted, to step forward,” said Congress chief Juan Guaido at a news conference. “We must disavow that which was not the result of a popular vote.”

But Maduro continues to enjoy consistent support from the armed forces, leaving him with few serious challenges at home despite the international outcry.

That support was on display on Thursday afternoon during a ceremony at Venezuela’s military academy in Caracas. Flanked by the military’s top commanders, Maduro strolled through a courtyard filled with thousands of uniformed troops.

The Washington Post on Wednesday reported that Padrino had told Maduro to step down last month and said he would offer his own resignation if he did not.

Supporters, many of whom were public servants identified by t-shirts of state agencies, rallied in the center of Caracas to celebrate the new term. Some said Maduro should do more to crack down on business leaders for raising prices.

“Sometimes it’s hard to find food because businesses hide it and then say it’s the president’s fault, even though we all know that’s a lie,” said Graciela Laya, 43, a homemaker, at a rally near the Supreme Court.

Maduro replaced Hugo Chavez after his death in 2013 and won a new six-year term in 2018 despite hyperinflation, chronic food shortages and a severe economic contraction. He blames an “economic war” led by the United States and local opposition adversaries for the country’s woes.

The vast majority of the opposition boycotted last year’s vote on the grounds that it was rigged in favor of Maduro, noting a host of irregularities, including Socialist Party activists offering monetary payments to voters.

The United States, the European Union, and many Latin American countries condemned the vote last year, and issued withering criticism of Maduro on Thursday.

“It is time for Venezuela to begin a transitional process that can restore the constitutional, democratic order by holding free and fair elections that respect the will of the Venezuelan people,” U.S. Secretary of State Mike Pompeo said in a statement.

Paraguayan President Mario Abdo said his country was shutting its embassy and pulling out all diplomatic personnel due to what it called a “rupture of constitutional order.”

Most other countries plan to maintain their embassies and diplomatic relations with Venezuela, according to sources consulted by Reuters.

Peru, which has barred Maduro and other officials from entry into the country, recalled the charge d’affaires from its Caracas embassy.

“Venezuela has unfortunately become a threat to Colombia’s national security,” tweeted Marta Lucia Ramirez, the vice president of neighboring Colombia, which has taken in more Venezuelan refugees than any other country. “It is time for this criminal dictatorship to end.”