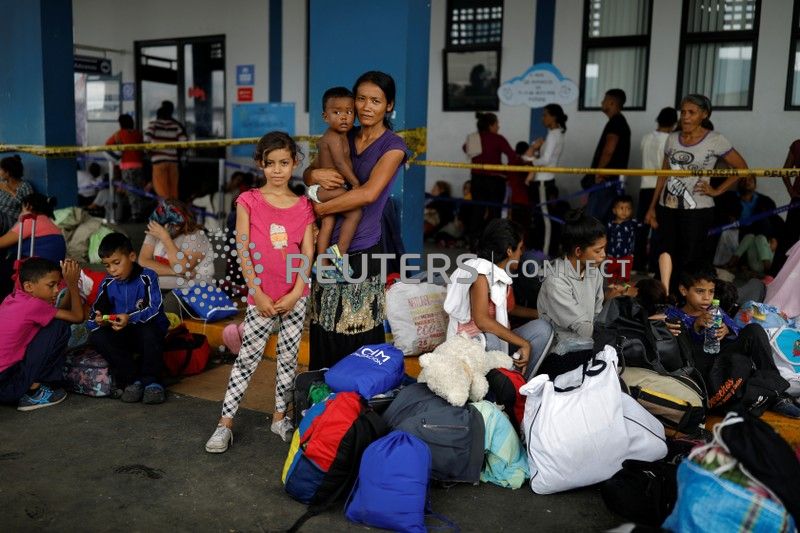 Venezuelan migrant Maria Valdez, 31, poses for a picture with her children Yoimairy, 9, and Darien, 1, while they wait to process their documents at the Ecuadorian-Peruvian border service centre, before they continue their journey, on the outskirts of Tumbes, Peru, June 17, 2019. Maria Valdez sold her house one year ago to raise the money to pay for her husband to travel to Peru. "My husband went first, I sent him, but I didn't want to go. But as the money he sent was not enough, we decided to come," Valdez said. "As soon as I was in Caracas, I wanted to return home, the bus was asking for cash and I did not have it, my daughter started crying and saying that she did not want to go, it was horrible." "But because of my children I maintained the strength to continue." REUTERS/Carlos Garcia Rawlins

TUMBES, Peru (Reuters) – Mothers dragged their children across three countries, trekking around border checkpoints and crossing rivers in waist-high water. Others were conned by fake travel agents, or robbed by bandits.

They breastfed in immigration lines, tended to fevers in parking lots, and stroked the tiny hands of their children on bus rides into the unknown.

Venezuelan women arrived in unprecedented numbers at Peru’s border this past weekend, according to the UN Refugee Agency UNHCR – part of a rush across South America by tens of thousands of Venezuelan migrants after Peru announced it would tighten entry requirements in June.

“It’s as if we were all blind, wandering here together,” Erika Quevedo, 28, said of her 8-day trip from her hometown of Barquisimeto in Venezuela with her two children and her mother.

Like many of the dozens of Venezuelan women interviewed by Reuters at Peru’s northern border city of Tumbes, Quevedo said she paid guides in Colombia to help her family make the trip, only to find they disappeared with their money.

With little cash left, she survived the rest of the trip by banding together with other single mothers she met on the way.

“I don’t know what I would have done without them,” Quevedo said of her female travelmates as they hustled with their kids towards Peru’s border.

Men dominated the first waves of Venezuelan emigration, helping to build a diaspora from Bogota to Madrid that is now more than four million strong, according to the United Nations.

But Venezuela’s deepening economic crisis is now dislodging some of the country’s neediest. Many of the women, children and elderly they left behind now are rushing to catch up to family members in cities across South America and beyond.

Fuelling the exodus are fading hopes for change in Venezuela, as the opposition’s bold plans to unseat President Nicolas Maduro appear to have diminished.

At the same time, U.S. sanctions aimed at weakening Maduro are exacerbating the economic crisis, hitting the poor hardest.

“We can’t survive on what they were sending anymore,” said Rosalba Barrios, a 51-year-old mother of eight crossing the border with a daughter and two grandkids, on their way to join her adult children in Lima.

Barrios, a seamstress, described a family torn apart by dysfunction in Venezuela.

Within 18 months of each other, she lost her 28-year-old son in one of Caracas’ frequent armed robberies and her 83-year-old mother to cancer due shortages of medicine.

“Emigrating isn’t easy,” Barrios said, crying as her family huddled together beneath the rain at the border checkpoint. “I never wanted to leave. Not me. It’s not easy to say goodbye. To leave the life you know.”

“Milk! Shampoo! Nothing!” said Armas, cradling her daughter before continuing her trip to reunite with her husband in Lima. “I just want to live somewhere we can get things and be normal.”

Many said they had been mulling a move for months, but had remained hopeful the crisis would abate. They mustered enthusiasm for Juan Guaido, Venezuela’s opposition leader who invoked the constitution in January to assume the presidency, in a challenge to Maduro.

“I really was betting on Guaido. I was sure he was going to change the country,” said Andraimi Laya, 22, her 2-year-old wiggling in her arms.

When Peru’s President Martin Vizcarra announced Venezuelans must have passports and visas to enter Peru starting June 15, Laya dropped everything.

She put her dream of becoming a police officer on hold, sold her last valuable possession, her TV, and headed for Peru with her daughter.

‘THIS IS A DEMONSTRATION’

Laya wasn’t alone. Nearly 50,000 Venezuelans entered Peru in the past week, according to official figures – creating dayslong backlogs at the border at Tumbes. In previous months, between 1,500 and 2,000 a day had entered.

“This is a demonstration. This is Venezuela saying we don’t want to be governed like that. We don’t want that man as president,” Margarita Sulbaran, a 55-year-old mother of seven, said of Maduro.

But the mad rush to Peru’s border in the past week was largely unnecessary. Peru only tightened entry requirements on Venezuelan migrants, leaving its policies regarding asylum-seekers unchanged.

The latest wave of migrants are arriving just as sentiment towards Venezuelans has soured.

But Quevedo said anything beats being a mother in Venezuela. When her son was born, prematurely, she couldn’t summon an ambulance or a ride to the hospital.

“My son was born in my house and my mom was the midwife,” Quevedo said. “If it weren’t for my mom, my son wouldn’t be here.”