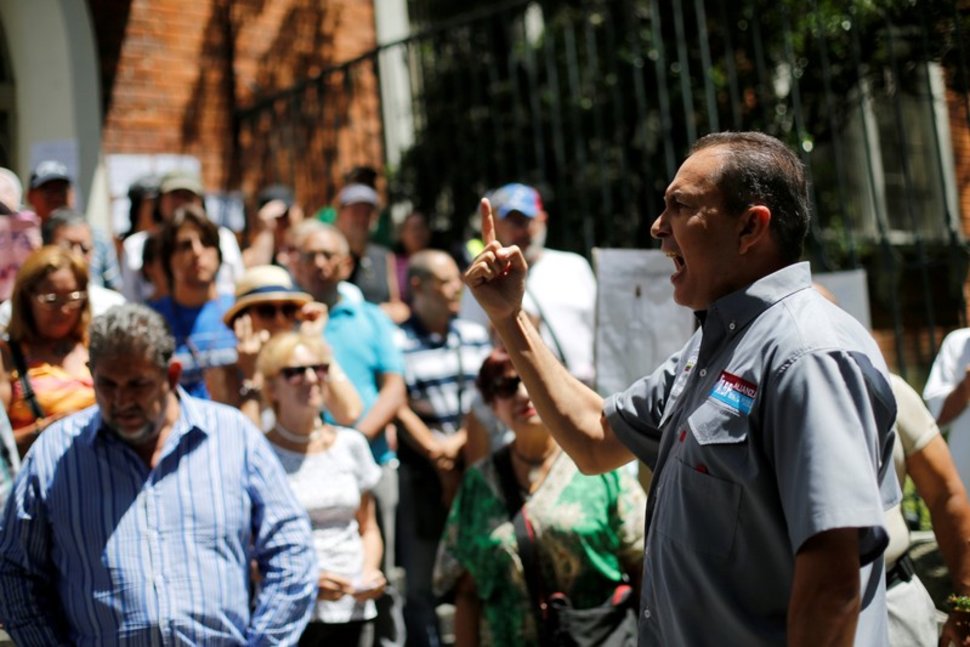 FILE PHOTO: Lawmaker Richard Blanco gives a speech to opposition supporters during a rally against the National Constituent Assembly, outside a school where a polling center will be established for a Constitutional Assembly election next Sunday in Caracas, Venezuela, July 24, 2017. REUTERS/Andres Martinez Casares/File Photo

The ex-head of the state intelligence service, Manuel Cristopher, the top Maduro government official to defect during the uprising, also spoke out for the first time on Thursday, urging Venezuelans to “build a new state” and combat corruption.

Richard Blanco of the Brave Peoples’ Alliance party entered Argentina’s embassy on Thursday, according to an Argentine foreign ministry source and a Reuters witness, while Americo De Grazia of the Radical Cause party sought refuge at Italy’s embassy, according to three sources close to him.

Blanco, Zambrano and De Grazia were among 10 lawmakers stripped of congressional immunity by the Supreme Court this week, which said the legislators should be investigated for crimes including conspiracy, treason and rebellion. Marianella Magallanes, another lawmaker, took refuge in the Italian embassy on Wednesday.

The opposition do not recognize the Supreme Court’s decisions since they say Maduro has stocked it with his own supporters. The U.S. government has threatened to impose sanctions on all of the court’s members.

“He (Blanco) is there as a guest; we can confirm that,” an Argentine foreign ministry official said, on condition of anonymity.

Guaido invoked the constitution to assume an interim presidency in January, arguing Maduro’s 2018 reelection was illegitimate. About 50 countries, including the United States and much of Latin America, have recognized Guaido as the country’s legitimate leader.

Maduro’s government has so far avoided arresting Guaido, which would likely provoke a strong international backlash. But the recent measures suggest the ruling Socialist Party is seeking to isolate him by pursuing key political allies.

“We take it as a given that the regime is going to keep escalating its repression,” Guaido said at a news conference, referring to Zambrano’s arrest. He also called for Venezuelans to take to the streets on Saturday for fresh protests against Maduro.Cristopher, the ex-intelligence chief, was replaced by Maduro on April 30 and his whereabouts remain unknown. The U.S. government lifted sanctions on Cristopher this week, in a bid to encourage other top officials to withdraw support for Maduro.

“Enough with blaming the world for our country’s disgraces, and to keep demanding more sacrifices from our people while some leaders make fortunes,” Cristopher said in a video posted on Twitter by Venezuelan TV outlet NTN24.

TOWED AWAY AND ARRESTED

Zambrano was arrested on Wednesday by agents from the SEBIN intelligence service, who used a tow truck to drag away his vehicle with him inside. He tweeted that he was being taken to the SEBIN headquarters in Caracas. Authorities have not confirmed where he was being detained.

Soley Zambrano, his daughter, said she last heard from her father around 6:30 p.m. on Wednesday.

“Minutes before it happened, he got in touch with me and said, ‘My daughter, you know who your father is: a democrat who will not give in to anything,” she told reporters outside the SEBIN headquarters on Thursday afternoon.

His arrest drew swift condemnation from the United States, which argues Maduro is a dictator who has undermined the rule of law.

“We will continue to use the full weight of the U.S. government to hold accountable those who subvert democracy and the Venezuelan constitutional order, and threaten the safety of the duly-elected National Assembly of Venezuela,” a senior White House official said on Thursday, on condition of anonymity.

The decision to strip legislators of their immunity and to arrest Zambrano was condemned as ‘unconstitutional’ in a statement on Thursday by the regional Lima Group bloc.

Other Guaido allies have already been jailed or fled to the embassies of sympathetic nations. Guaido’s chief of staff, Roberto Marrero, was arrested in March and remains in jail.

Last week, Leopoldo Lopez – Guaido’s political mentor – moved into Spain’s diplomatic residence after escaping house arrest to appear alongside Guaido during his call for the military to rise up.

The United States has slapped sanctions on state oil company PDVSA and several top figures in Maduro’s government in a bid to pressure Maduro to step aside so Guaido can take office and call new elections.

But Maduro retains control of the military and state functions. He has branded Guaido a U.S.-backed puppet seeking to oust him in a coup.