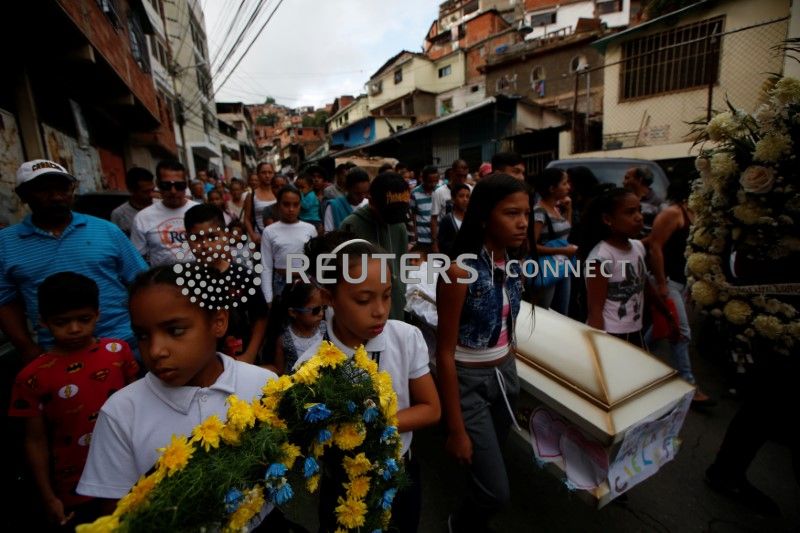 Relatives carry a coffin containing the body of Erick Altuve, a 11-year-old boy who died from respiratory problems while in care for stomach cancer at the public Jose Manuel de los Rios hospital, at Petare neighborhood in Caracas, Venezuela, May 30, 2019. Picture taken May 30, 2019. REUTERS/Ivan Alvarado

CARACAS (Reuters) – Under a wooden arch decorated with white balloons in a small house in Caracas’ largest slum, the body of 11-year-old Erick Altuve lay in a small coffin covered in cuddly toys and cartoon drawings, one of four children who have died this month in Venezuela’s main pediatric hospital.

Altuve died on May 26 from respiratory problems while being treated for stomach cancer at the Jose Manuel de los Rios public hospital, a concrete tower ringed by a white security fence in the center of Caracas.

For the past six months, Altuve had not received his medication, his mother, Jennifer Guerrero, said, because of widespread shortages of drugs and medical equipment that have devastated Venezuela’s health system.

“My son really wanted to live,” said Guerrero, a 30-year-old housewife, during a protest over the deaths of the four children by their relatives and nurses outside the hospital.

Children have paid an especially heavy price from the collapse in Venezuela’s healthcare system as the economy has shrunk by over a half during six years of recession.

The most recent figures from Venezuela’s Health Ministry show that infant mortality, covering children age 1 and below, rose 30% to 11,466 cases in 2016 from the year before. There is no official data on children’s’ deaths from cancer.

More broadly, the mortality rate for children under 5 years has risen by 40% since 2000, the humanitarian group Save the Children said in its 2019 report.

Altuve’s death in particular has generated a wave of anger and grief across Venezuela, with outraged newspaper headlines, calls from the opposition for an investigation and an outcry from medical nongovernmental organizations.

Altuve and the three other children who died were part of a group of 30 kids at the hospital, better known as JM, waiting to go to Italy to receive bone marrow transplants under a 2010 agreement financed by the Venezuelan government that was intended to cover the cost of transportation and the operation.

The opposition has blamed their deaths on President Nicolas Maduro, whose socialist administration has presided over the collapse of the once-wealthy nation’s economy and severe reductions in health-care spending.

Maduro’s government, however, says U.S.-imposed sanctions were responsible for the children’s deaths, by freezing funds allocated to buy medicine and send the children to Italy for treatment under the 2010 agreement.

Maduro’s critics noted that his government in 2013 cut the allocation of foreign currency to the health sector by one-fifth.

According to hospital and pharmacy representatives, the supply of medicine and medical equipment has steadily declined since the cuts to dollar funding in 2013, while the U.S. government began to impose sanctions in August 2017.

Virginia Segovia, president of the Foundation to Help Children with Cancer (Fundanica) in Carabobo state west of Caracas, said that in its first 22 years, the charity registered 98 child deaths from the disease in that region.

“In the past two years, we already have 105 dead children … and that is due to the lack of supplies and equipment in hospitals, the extreme emergency we have due to lack of medicines and chemotherapy,” she said.

Venezuela’s Information Ministry, which handles news media inquiries, and the health ministry did not respond to requests for comment.

Altuve was taken to the JM hospital on Dec. 25, 2018, due to a sharp pain in his stomach, his mother said. The hospital cleared him to go home after a few days but he returned on Jan. 14, 2019 and never left, according to his mother.

“He was saying that he was going to get better and the cancer wouldn’t take him,” his mother said.

On Friday, dozens of mourners carried his coffin through the narrow streets of Caracas’ eastern Petare slum from his grandparents’ house where the wake was held to a cemetery outside the city.

Children from his school clustered around to say goodbye as speakers played Vallenato, accordion-based music from Colombia’s Caribbean coast. “Erick, one more angel in heaven,” read a note on the coffin.

Venezuelan Foreign Minister Jorge Arreaza said on Monday that state-run oil firm PDVSA had signed a cooperation agreement in 2010 with Italy’s bone marrow transplant association. State-funded Venezuelan television network Telesur reported on Tuesday that the agreement had funded treatment and transplants for almost 900 patients since then.

Novo Banco and the Italian transplant association did not respond to requests for comment.

There are 52,800 new cases of cancer among adults each year in Venezuela, which has a population of 30 million people, according to Juan Saavedra, director of Venezuela’s anti-cancer society. In 2017, 26,510 people died from cancer, 15% more than the year before, Saavedra said.

“When you are born in Venezuela, you are already sentenced to death,” said Mauricio Navas, whose six-year-old daughter Mariana is being treated for leukemia at the JM hospital.