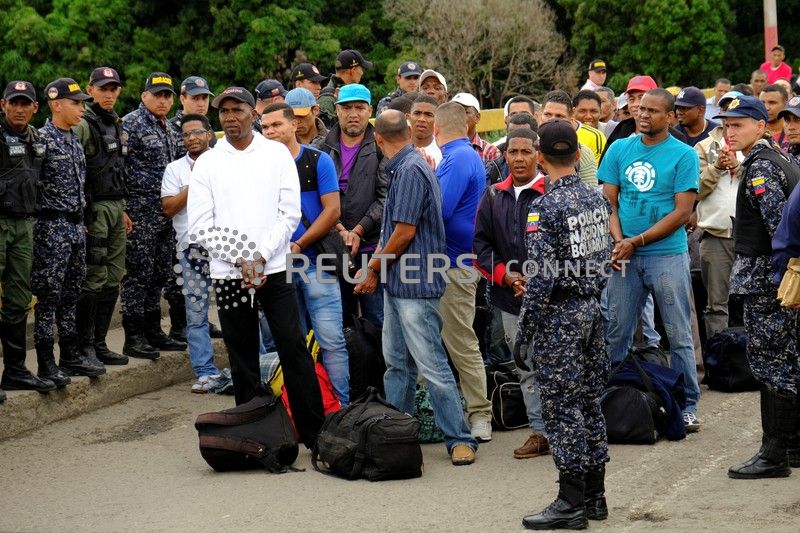 Members of Venezuelan security forces stand guard at the Simon Bolivar International Bridge as a group of Colombian citizens, who had been detained almost three years ago on allegations they were paramilitaries, wait to be deported back to Colombia, in San Antonio del Tachira, Venezuela, as seen from the outskirt of Cucuta, Colombia June 29, 2019. REUTERS/Ferley Ospina NO RESALES. NO ARCHIVE.

CARACAS (Reuters) – Venezuela’s government on Saturday deported 59 Colombian citizens who had been “arbitrarily” detained there almost three years ago, the United Nations human rights office said, applauding it as a “positive sign.”

Colombia’s foreign ministry had requested last year that the United Nations intervene to negotiate the release of those arrested in September 2016 by Venezuelan President Nicolas Maduro’s government on allegations they were paramilitaries.

The foreign ministry had said Venezuelan authorities were keeping them in poor conditions and had not followed correct legal process. Venezuela’s government had no immediate comment on their release.

“These 59 compatriots have returned to our country and will go to their homes,” President Ivan Duque said during an event in eastern Vichada province. “We hope these compatriots can finish with this horrible night and be reunited with their loved ones.”

Duque’s adviser on human rights, Francisco Barbosa, said on Twitter earlier on Saturday that he would receive “59 citizens arbitrarily detained by the dictatorship of Nicolas Maduro” in the border city of Cucuta.

The U.N. human rights office wrote on Twitter that “we applaud their release.”

“It is a positive sign that the government is complying with the human rights commitments that it made during (U.N. human rights chief) Michelle Bachelet’s recent visit. We expect more releases in the coming days,” the office said.

Bachelet travelled to Caracas last week for a three-day visit to meet with Maduro and opposition leader Juan Guaido, as well as activists and victims of human rights violations.

Colombia recognises Guaido as Venezuela’s legitimate head of state, along with dozens of other countries, while Maduro accuses Guaido of trying to illegally force him from power.