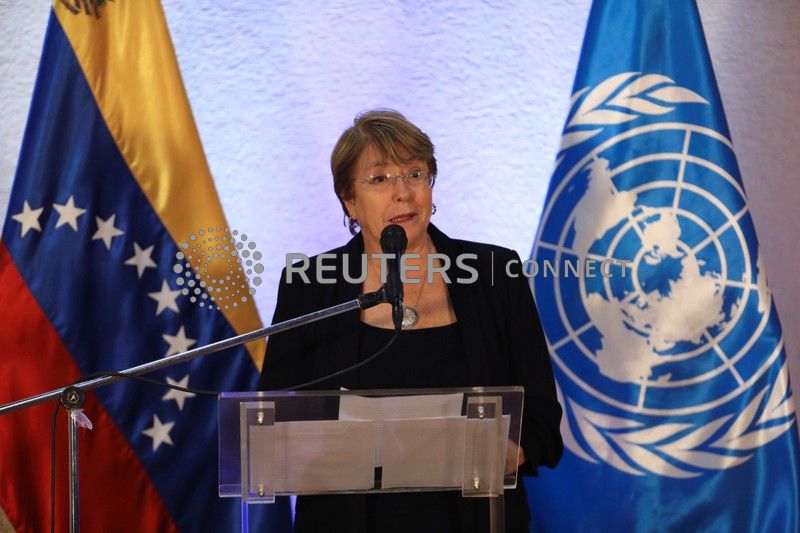 GENEVA (Reuters) – Venezuelan security forces are sending death squads to murder young men and stage the scenes to make it look like the victims resisted arrest, the United Nations said in a report issued by its human rights chief on Thursday.

Government figures showed that deaths ascribed to criminals resisting arrest numbered 5,287 last year and 1,569 by May 19 this year. The U.N. report said many of them appeared to be extrajudicial executions.

Families of 20 men had described how masked men dressed in black from Venezuela’s Special Action Forces (FAES) had arrived in black pickups without licence plates. In the accounts, the death squads broke into houses, took belongings and assaulted women and girls, sometimes stripping them naked.

“They would separate young men from other family members before shooting them,” the report said.

“In every case, witnesses reported how FAES manipulated the crime scene and evidence. They would plant arms and drugs and fire their weapons against the walls or in the air to suggest a confrontation and to show the victim had ‘resisted authority’.”

The report said the killings were part of a strategy by the government of President Nicolas Maduro aimed at “neutralizing, repressing and criminalising political opponents and people critical of the government”, which accelerated since 2016.

The U.N. also released a written response to its findings by Venezuela’s government, which called the report a “selective and openly partial vision” about the human rights situation in the South American country. It argued the U.N. relied on “sources lacking in objectivity” and ignored official information.

“An analysis that privileges negative testimonies to the extreme, while hiding or minimizing measures adopted to advance human rights, is not objective or impartial,” read the government’s response.

Bachelet said in a statement that she had the government’s commitment to work with the United Nations to resolve some of the thorniest issues, including the use of torture and access to justice, and to allow full access to detention facilities.

“I sincerely hope the authorities will take a close look at all the information included in this report and will follow its recommendations. We should all be able to agree that all Venezuelans deserve a better life,” she said.