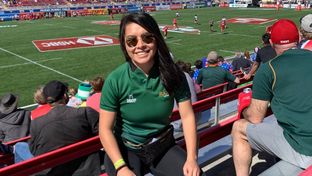 WORLD Rugby Women’s Executive Leadership Scholarship recipient Fernanda Vázquez discusses her life in rugby and how her love affair with the game began.

Mexico is a country with a rich history, and since the time of the Aztecs it is one in which entertainment has come in the form of sport.

One of those ancient sports was tlachtli, a blend of tennis, football and basketball in which arms and feet were not used and the losing captain would be sacrificed.

The Aztecs also played ulama as a way to resolve conflicts – land, tributes, commercial and others – without the need of extreme violence.

It is probable that certain elements of rugby would have been part of their sporting activities, although it has taken a very long time for the game to establish itself in a country brimming with beauty and tradition. Rugby was first played in Mexico in 1930.

The global growth of the game has impacted on the country of more than 125 million inhabitants, although it is far from being a massive sport such as football, baseball or other much-followed American sports.

Fernanda Vázquez was not particularly fond of sports. Her first encounter with an oval ball came as a cheerleader of the gridiron team at the Universidad de Monterrey.

But then a second ball made it into her hands as she came across rugby at the Universidad ITAM (Instituto Tecnológico Autónomo de México) in 2013, from where she graduated in Political Sciences.

The university, in the country’s capital, was in the process of setting up their first women’s team and were in search of players.

“I had no idea what rugby was; I did some research and I thought it was violent,” she said as she described how her love affair with the game started.

“My friends convinced me and I gave it a try. It was tough at first as I had never done sports with balls.”

Vázquez remembers that she enquired “why was it that women did not play contact sports?”