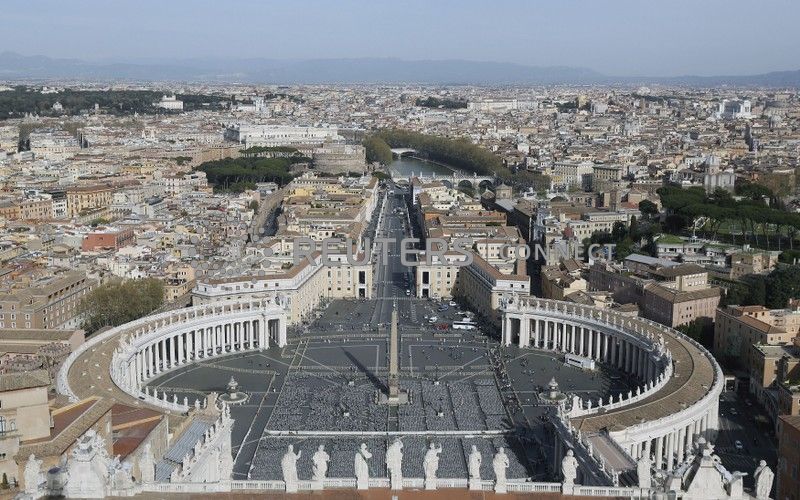 FILE PHOTO: Saint Peter's Square in seen from top of the basilica at the Vatican, March 31, 2016. REUTERS/Stefano Rellandini

VATICAN CITY (Reuters) – Vatican police raided the home and office of a senior Catholic Church official on Tuesday, seizing documents and computers in the latest phase of an investigation into the purchase of luxury London real estate.

The raid targeting Monsignor Alberto Perlasca followed the suspension last year of five Vatican employees, the resignation of the Vatican’s police chief and the departure of the former head of the Vatican’s Financial Information Authority (AIF).

Though he is currently a magistrate in a Vatican tribunal, the accusations against Perlasca involve his previous position as head of administration of the Secretariat of State, a Vatican statement said. He held that post until last July.

The official Vatican News website said separately that Perlasca was suspected of embezzlement, abuse of office and corruption.

The Vatican statement said the police raid resulted from questioning of the five employees suspended after a similar police raid on Oct. 1 on the offices of the AIF and of the Secretariat of State – the administrative heart of the Church.

The investigation involves suspected irregularities in the estimated $200 million purchase of a building in London’s Chelsea district several years ago as an investment using Church funds.

Pope Francis and other Vatican officials have defended using Church money for real estate investments as long as they are ethical. He said last year Church money should not be “kept in a drawer”.

Cardinal Angelo Becciu, also a former top official of the Secretariat of State, said on Monday the value of the London investment had tripled but that unspecified middlemen had behaved improperly.

In November, the pope acknowledged there had been suspected corruption related to the purchase but said he was glad that its discovery stemmed from whistle blowers inside the Vatican instead of information coming from outside.

The pope said this showed that new internal financial controls were working in the Vatican, a tiny city-state surrounded by Rome. Last Saturday he said the real estate affair had “caused disorientation and unease” among Catholic faithful.

One of the five employees suspended after the Oct. 1 raid was Tommaso di Ruzza, the AIF director, or number two. The AIF has denied all wrongdoing.

Following the first raids, the Egmont Group of world financial intelligence units suspended the Vatican from full membership because of concerns about the AIF’s ability to keep confidential documents secure.

In November, the pope did not renew the five-year mandate of Swiss lawyer and anti-money laundering expert Rene Bruelhart as head of the AIF and appointed Carmelo Barbagallo, a respected senior Bank of Italy official, to succeed.

The Vatican was fully re-admitted to the Toronto-based group last month following negotiations with Barbagallo.