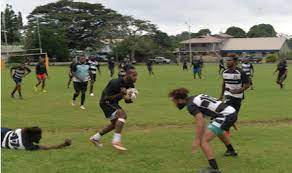 Former Biosecurity Director Timothy Tumukon is now the new President of VRU taking over the role from John Kalo.

Darval Simon is the new Secretary while Ali La’au was appointed as Treasurer and Pastor Bill Taiwia is the new Competition Manager and will be in charge for the running of all VRU domestic competitions.

“My main plan now is to review the VRU constitution,” he said.

The new President also calls for Unity from all clubs and players.

“We are also calling for unity and cooperation with all clubs in developing rugby in Vanuatu.”

In addition wants Tumukon more women’s participation in the sport.