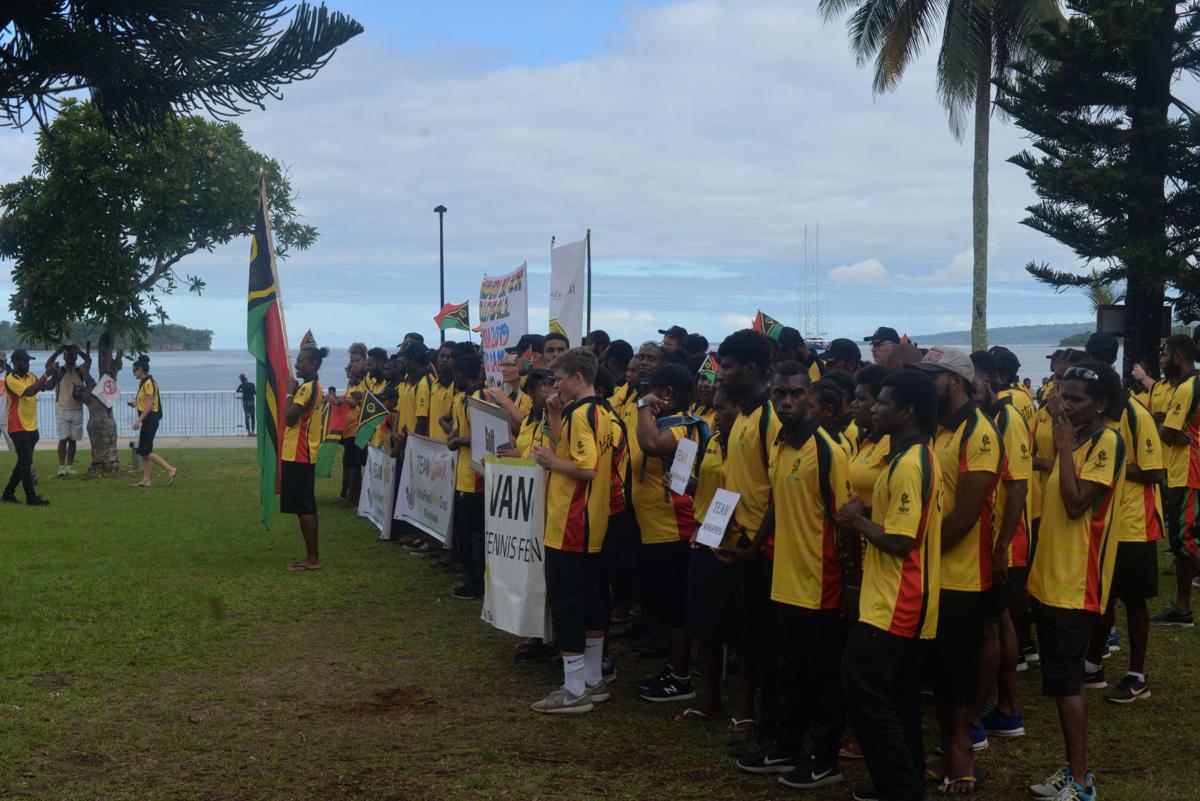 PORT VILA, 03 JULY 2019 (VANUATU DAILY POST) – The Vanuatu Association of Sports and National Olympic Committee (VASANOC) has officially introduced to the public on Saturday at the Seafront Park the national Team Vanuatu for the 2019 Pacific Games.

A parade with chants from the Vanuatu team slogan ‘Vanua Pawa-Never Give Up’ took place from the Grande Hotel, through town and to the Seafront stage.

He said Team Vanuatu aims to beat its medal tally of the 2015 Pacific Games in PNG.

He encouraged all athletes to perform their best always and to fly the Vanuatu flag up high. Mr Tavo reminded them that it is not only about representing themselves but the country as a whole.

Speaking on behalf of all athletes, Table Tennis champion, Annolyn Lulu, acknowledged and commended the Vanuatu Government, VASANOC and the public support for the privilege of sending a Vanuatu team to the Pacific Games, once again, in Samoa this year.

Lulu reassured the government and people of Vanuatu that team Vanuatu will perform to the best of its abilities and to represent the country with pride always during the competitions.

The DG of Youth and Sports, Vira congratulated all athletes and officially presented the Vanuatu team to the packed crowd gathered at the Seafront Park.

Acting Prime Minister and Deputy PM Napat also congratulated the team and encouraged all athletes to exercise discipline in their mission to Samoa.

Napat emphasised that attitudes determine each one’s journey. He also reminded athletes that they are also Vanuatu ambassadors and to fly the Vanuatu flag with pride in Samoa.

The President of VASANOC, Mr Boudier officially announced the Vanuatu flag bearer of the 2019 Samoa Pacific Games, Ken Kahu, a para-athlete who is a silver medal winner in the Men’s Ambulant Javelin at the Arafura Games in April this year.

Kahu also qualified for the Tokyo 2020 Paralympics. He is the first Para Athlete to be named Flag Bearer for Team Vanuatu in the Pacific Games.

Speaker of Parliament, Esmon Saimon officially handed over the flag to Kahu. He encouraged and congratulated all athletes in their journey in Samoa and to always aim high when representing Vanuatu. He reassured all athletes that they have the support of the government and the people of Vanuatu on their mission to Samoa.