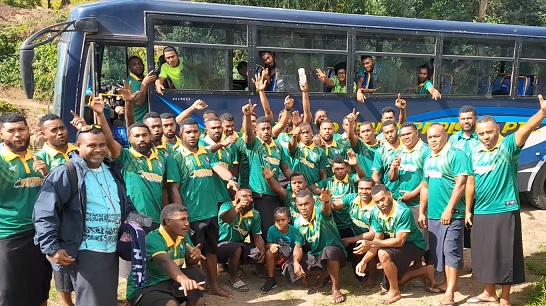 Bua and Macuata have qualified for the semi-finals of the Vodafone Vanua Cup Championship and both matches will be held at Subrail Park in Labasa.

The unending screams and cheers that roared through the Labasa park resulted in players not hearing the referee’s whistle as they continued to play.

Bua rugby fans hired six buses from their various villages to cheer for their team and at the end, they sang hymns, smiled and shed tears of joy as they embraced their players.

“This could be the first time for Bua to play in the Skipper Cup challenge next season. We couldn’t have done it using our strength, but we relied and depended on God which saw us through the match and this season,” he said.

“It wasn’t easy playing against Serua, but we walked onto the ground with faith knowing that it will be a good game. The boys were overconfident and I thank them for the strength they showed during the 80-minute match.”

Bua dominated the first half.

They scored their first unconverted try, 15 minutes into the first half to lead of 5-0 at halftime.

Bua opened the second half with a converted try increasing their score to 12-0.

Serua came back strongly and scored two unconverted tries sealing the game at 12-10.

No comments could be obtained from the Serua team.