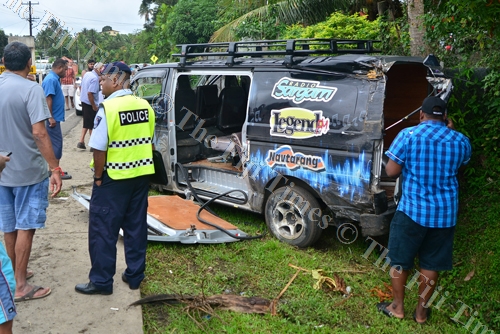 A MAN who is alleged to have caused the death of a woman in an accident at Valelevu yesterday remains in custody.

Police spokesperson Ana Naisoro said the 25-year-old was driving under the influence of alcohol when he ran into the the woman and two others.

“The victim was walking with two others along Kanace Road yesterday afternoon when it is alleged the suspect lost control of his vehicle and ran into the three who were on the side of the road,” Ms Naisoro said.

She said the victim was rushed to the Colonial War Memorial Hospital where she was pronounced dead while another woman is admitted at the Intensive Care Unit.

Ms Naisoro said the third victim is admitted in the observation ward.

“The suspect was tested and found to be in excess of the prescribed limit and remains in custody at the Valelevu Police Station as investigations continue.”