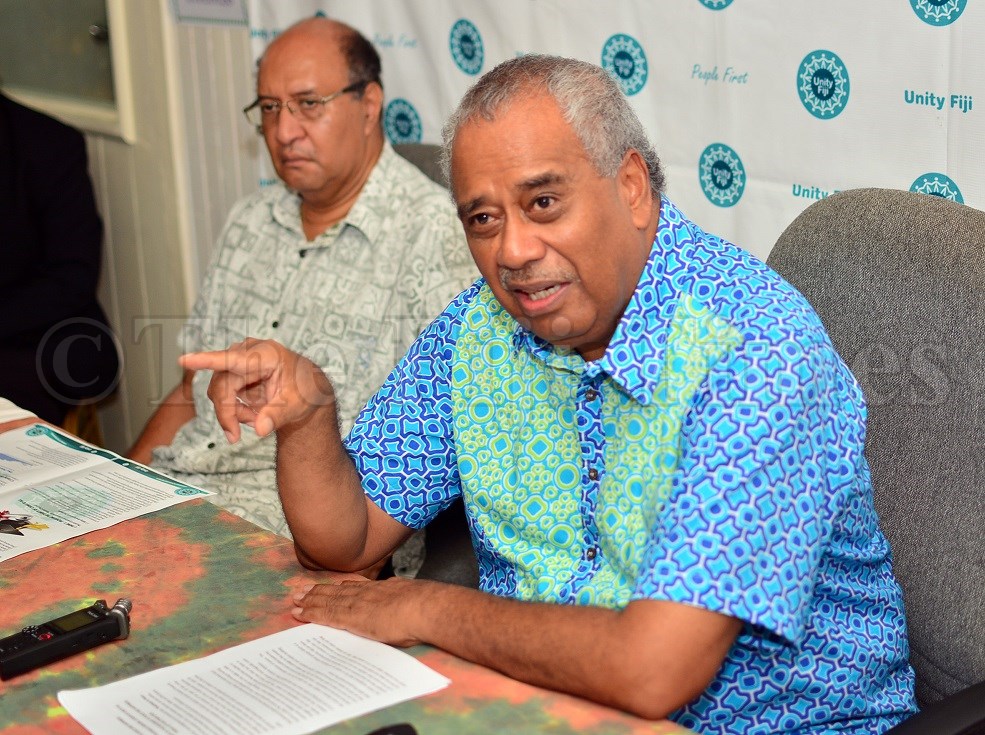 Tomasi Vakatora (left) with Unity Fiji leader Savenaca Narube during his time with the party in the last elections. Mr Vakatora is contesting the elections this year under SODELPA. Picture: FILE

Tomasi Vakatora claims lack of accountability and transparency in the Unity Fiji Party is the reason he jumped ship and joined the Social Democratic Liberal Party (SODELPA) to contest the 2022 General Election.

He said he disagreed with the way the party was managed.

“For over five years – from the time the party was registered in 2017 – there was no AGM held until early this year,” Mr Vakatora claimed.

“There were no management board meetings for over two years from 2018 to 2021 and no monthly financial reports were prepared for the board to consider.

“These show lack of the accountability and transparency that some of us wanted. Note that I was not the only one pushing for it.”

He claimed Mr Narube was always opposed to meetings being held. Mr Vakatora claimed “numerous attempts” were made to resolve differences with Mr Narube and on two occasions they presented a sevusevu to him to discuss concerns but after they thought it had been settled, Mr Narube “reverted to his disruptive ways”.

He said the board endorsed an AGM to be held in January this year but Mr Narube opposed it, saying the Western branches had not been formed and therefore would not be represented.

“The fact of the matter is that there were no registered party members’ right across the Western Division from Nadroga to Ra, with about 50 from Tavua only recently registered with their subscriptions yet to be paid.

“The Central Division branch was the only active one in the whole of Fiji.

“Given the short notice of the intention to cancel the AGM and that plans were already made for members to attend, the majority of Central Division branch members decided to support the continuation of the AGM.”

Mr Vakatora claimed the Central Division branch had paid all expenses for the AGM and not the party head office.

“This was done to ensure that the AGM was held. The other reason we decided to continue with the AGM was that the party constitution was silent on whether the board had the powers to cancel an AGM.”

He said they held a vote and went ahead with the AGM which was well attended.

“The following day we presented Mr Narube with a sevusevu to try and resolve the matter.

“He promised to meet with me on one to one basis, but failed to commit to a date and time and after a few weeks of waiting I decided to quit Unity Fiji at the end of February.”

Mr Narube declined to comment when asked about the claims by Mr Vakatora, but said Mr Vakatora and a few party members tried to hold an annual general meeting without the board’s approval.

He said they could have ironed out any differences Mr Vakatora had, but respected his decision to join SODELPA.