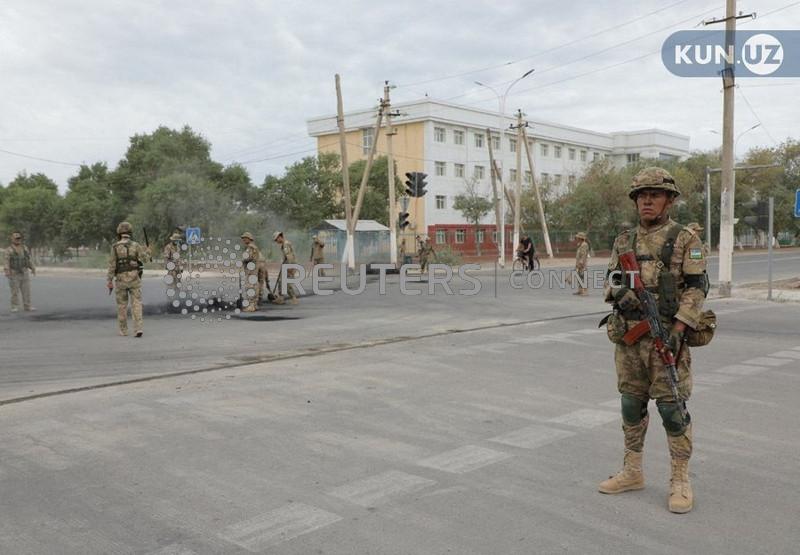 ALMATY (Reuters) -Eighteen people were killed and 243 wounded during unrest in Uzbekistan’s autonomous province of Karakalpakstan last week, Uzbek authorities said on Monday – the worst bout of violence in the Central Asian nation in 17 years.

Security forces detained 516 people during the protests, which broke out over plans to curtail Karakalpakstan’s autonomy, but have now released many of them, the National Guard press office told a briefing.

On Saturday, President Shavkat Mirziyoyev dropped plans to amend articles of the constitution concerning Karakalpakstan’s sovereignty and its right to secede. He also declared a month-long state of emergency in the northwestern province.

According to the prosecutor general’s office, 18 people died “from grave wounds” sustained during the clashes. Russia’s RIA news agency quoted the head of the National Guard as saying the toll comprised 14 civilians and four law enforcement officers.

Two exiled opposition politicians in contact with people on the ground told Reuters they believed the real figure was much higher. It was not possible to independently establish the death toll.

Karakalpakstan – situated on the shores of the Aral Sea, for decades an environmental disaster site – is home to the Karakalpaks, an ethnic minority group whose languageis distinct from Uzbek, although related.

“Karakalpaks are not Uzbeks … They have their own traditions, culture and law,” Aman Sagidullayev, Norway-based leader of the pro-independence Alga Karakalpakstan party, told Reuters, accusing the government of waging a “punitive operation”.

A group of opposition politicians and activists who call themselves the government of Karakalpakstan in exile published an appeal to Mirziyoyev.

They called for the release of arrested demonstrators, the dissolution of the Karakalpak government and new elections, and a review of the actions of law enforcement agencies including “the unjustified and disproportionate use of force that led to human victims, torture and arbitrary detention”.

They complained of discrimination against their language and the “silencing and distortion” of the region’s history.

Russia, with which ex-Soviet Uzbekistan has close ties, said the matter was Uzbekistan’s domestic affair. The Russian foreign ministry said it was confident that authorities there would succeed in normalising the situation, and said issues should be solved by “legal means” rather than rioting.

The European Union called for “an open and independent investigation into the violent events in Karakalpakstan”.

Mirziyoyev’s office said he had discussed the matter with EU Council President Charles Michel, and that the unrest had been incited by “criminal elements”.

An exiled Uzbek opposition politician, Pulat Ahunov, told Reuters that the curfew imposed for the duration of the state of emergency and tight security seemed to have stabilised the situation, but there was still a risk of ethnic clashes.

There are an estimated 700,000 Karakalpaks among Uzbekistan’s 34 million people, most of them in the autonomous republic. Geographic and linguistic proximity has led many to seek work and sometimes relocate to neighbouring Kazakhstan.

Some observers believe Tashkent’s miscalculated attempt to curtail Karakalpakstan’s autonomy – Mirziyoyev himself has criticised local MPs for not telling him about public opposition to it – may have been a bid to pre-empt any upsurge in separatism against the background of the war in Ukraine.

In 2005, Uzbek security forces crushed armed protests in the city of Andizhan, with 173 people killed in the clashes, according to official reports. The government at the time blamed the crisis in Andizhan – located in the opposite, eastern part of Uzbekistan – on Islamist extremists.