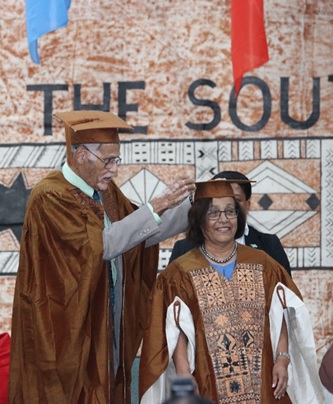 President Hilda Heine of the Republic of Marshall Islands being installed as the 26th Chancellor of USP by Winston Thompson, Pro-Chancellor and Chair of Council. Picture: SUPPLIED

PRESIDENT Of the Republic of the Marshall Islands Hilda Heine was installed as the 26th Chancellor of the University of the South Pacific (USP) at the second graduation ceremony of the year on September 19, 2019, at the FMF Gymnasium.

The installation was done by Mr Winston Thompson, Pro-Chancellor and Chair of USP Council.

In his remarks, Mr Thompson said this graduation ceremony was a special one because of the installation of the University’s 26th Chancellor, and a historic moment for the university as she becomes the first female Chancellor of the USP.

Ms Heine has been appointed to serve in the role from July 01, 2019, for a term of one year. The Chancellor is the titular head of USP, who confers the qualifications of the University.

President Heine succeeds the outgoing Chancellor, Taneti Maamau, the President of the Republic of Kiribati.

In her graduation speech, Ms Heine noted that it was her pleasure to commence her short term of service as Chancellor of the USP.

“I am very conscious that I am following in the footsteps of many distinguished leaders from 12-member countries of USP, including the first Chancellor from the Marshall Islands, Iroojlaplap Amata Kabua,” she said.

She said that as a national leader, she had a unique sense of belonging when she realised that she is a stakeholder, a co-owner, in this great enterprise, in this great partnership.

“USP – envisioned by the leaders of our region, patiently fostered and nurtured by successive Pacific Island governments, and converted by USP leadership and dedicated professionals from a mere idea to a constructive and living institution that we have today.

“All this, was done and executed in the face of indescribable setbacks: little money, challenges in geographical and logistics, incredible cultural diversities and language, incomparable differences in natural resource endowment, and different colonial and political experiences,” she added.

President Heine said she believed, “the secret to our collective strength lies in our sheer ability to continue to build and strengthen our own respective countries, while recognising when to subordinate our needs as individual partners to the over-arching interest of the common-weal. Some people have called this Pacific Solidarity”.

She believed this is the underlying magic if one should ever want to systematically cultivate a truly Pacific perspective, our Pacific way of knowing, our point of reference, even a strong ship must have a mooring.

“Whether the subject matter is a research programme, technology, academic pursuits, or challenges of climate change.  They all must spring from, and converge on, a common need, a common purpose. The question is:  how do we creatively and constructively translate our differences and diversities, our latent talents and limited resources, into strength,” she stated.

This she said, is when USP comes in; with their creativity and constructive analytical powers.

“I am grateful that USP had, so far, escaped the usual criticism that universities are monolithic institutions, forever buried and entrenched in their own academic pursuits and research, incapable of changing, incapable of taking its gift of knowledge to the community.  May you never take that route,” she said.

She assured that the region is proud of USP’s accomplishments.

“However, your proven record allows you little time to rest on your oars, now or in the future. They say that if you want things done, take them to the one who is the busiest,” she added.

USP she said, is called upon to seek viable and effective solutions to climate change, and to do so with unrestrained speed, for the clock is ticking for the critically vulnerable ones among us.

The Chancellor of the University is appointed from USP’s 12 member countries in alphabetical rotation.