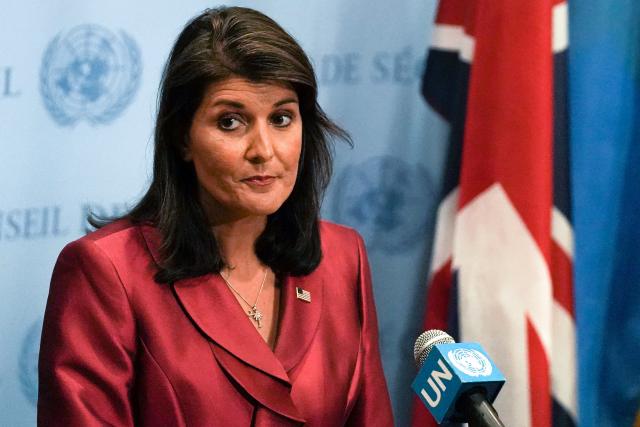 WASHINGTON (Reuters) – U.S. Ambassador to the United Nations Nikki Haley on Sunday dismissed Iran’s assertion that Washington and its Gulf allies were to blame for a deadly parade attack and said Tehran should look closer to home.

Before leaving for the United Nations on Sunday, Iranian President Hassan Rouhani accused other countries including the United States of provoking the shooting attack on a military parade that killed 25 people on Saturday.

Haley dismissed his comments as rhetoric.

“He’s got the Iranian people are protesting, every ounce of money that goes into Iran goes into his military, he has oppressed his people for a long time and he needs to look at his own base to figure out where that’s coming from,” she told CNN’s “State of the Union.”

“He can blame us all he wants. The thing he’s got to do is look at the mirror.”

Iran’s Revolutionary Guards vowed on Sunday to wreak “deadly and unforgettable” vengeance for the attack, which killed 12 of their comrades.

There has been a blizzard of furious statements from top Iranian officials blaming the United States and Gulf kingdoms for the bloodshed and threatening a tough response.

“America wants to cause chaos and unrest in our country so that it can return to this country, but these are unreal fantasies and they will never achieve their goals,” Rouhani said.

Haley was asked about comments made Saturday night after the attack by President Donald Trump’s personal lawyer, Rudy Giuliani. He told an Iranian opposition group that U.S. sanctions on Iran are leading to economic pain that could lead to a “successful revolution.”

Giuliani has made similar comments before on Iran, and the State Department has said he does not speak for the administration.

The U.N. ambassador, without mentioning Giuliani, told CNN, “The United States is not looking to do regime change in Iran.”

Trump administration policy does not seek a change of government even though it is reimposing sanctions that are crippling Iran’s economy after Trump pulled out of the 2015 Iran nuclear agreement. Haley said Washington was trying to counter Iranian malign activities in the region as Tehran continued to test ballistic missiles, support terrorism and sell arms.