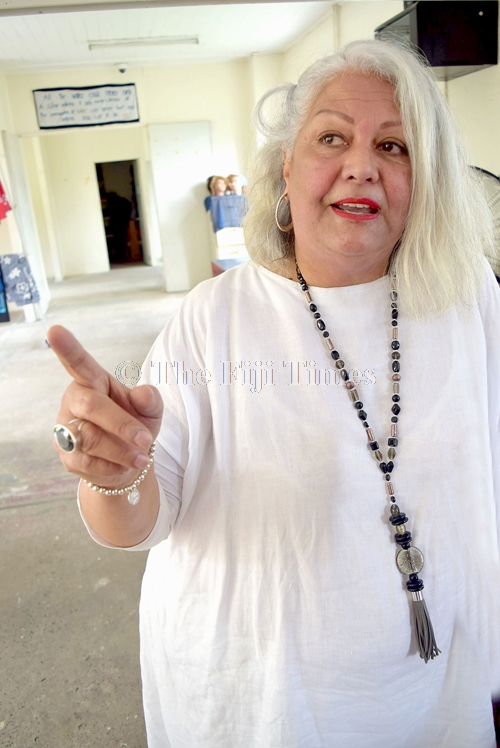 Linda Walker, who grew up in Suva says her work with inmates is one way of giving back to society. Picture: SOPHIE RALULU

UP at the Women’s Corrections Centre, a group of young women are undergoing a skill program designed to help them start a business when they are released back to society.

Leading this initiative was Linda Walker, a fashion and jewellery designer from Sydney, Australia.

Linda and her daughter Natacha Brochard, a design and visual arts teacher, had been carrying out this work among Fijian inmates since 2015. It’s a skill they hope to pass on as their contribution back to society.

“I was a former scholar of Suva Grammar (School) and Mrs Jane Rickets was my former teacher there,” Linda said.

“It was at the Suva Grammar reunion more than four years ago that I happened to meet Mrs Rickets. I learned that she was doing this sort of work among the male inmates at the Fiji Corrections Centre.

“It really piqued my interest; so in 2015 my daughter and I decided to pay them a visit and since then we’ve never looked back.”

She spent the early part of her childhood in the country before her family moved overseas.

But it hasn’t stopped her from visiting from time to time. “Last year while I was chatting with the Fiji Corrections (Service) Commissioner, Mr Francis Kean; he mentioned if we could run a similar program with their women prisoners and I’m thankful that he has been quite supportive throughout,” she said.

“At the men’s prison, my daughter was teaching them art, and we bought all their art material. I taught them how to make jewellery and they were amazing. “And now the women have that opportunity. But really it’s about upskilling.”

The rehabilitation program runs for six weeks from June 11 to July 22. The female inmates learn how to sew clothes and make jewellery. “It’s wonderful to give back and for me, the greatest gift that I could have is to share my skill,” says Linda.

“I call it skill-share because I think everybody has a gift. It’s just a chance meeting or a moment where the gifts are unwrapped and that’s what
I’ve done with the girls because I think the girls are pretty brilliant. I told them that we all have a gift, and we need to all recognise that.

“None of them had ever been on a sewing machine before, and then during the first module, we told them about drafting patterns and size and so forth and they made their first garment which was a kaftan. So it has been a really great journey so far.”