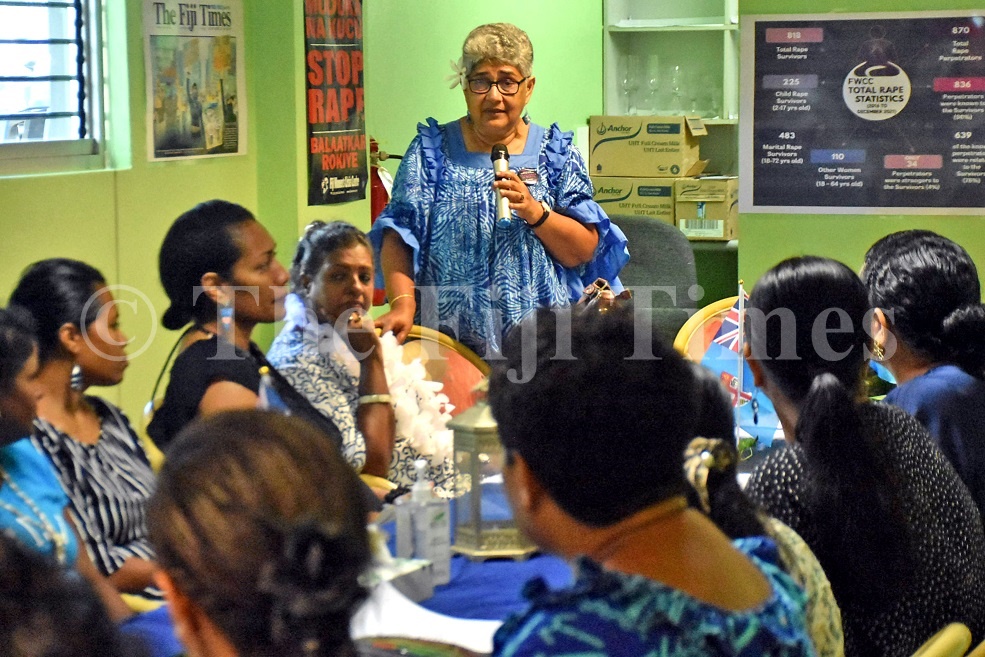 Globally, women in office have often been the most underrepresented when it comes to politics, and in the Pacific, it is even more so.

Statistics from United Nations Women for Asia and the Pacific show that the region has the lowest levels of women’s representation in national office, a mere 7.3 per cent recorded as of 2018.

In Fiji, the onset of the 2022 elections provides an opportunity for women to step up and make their mark on the political scene, however, there are a few challenges in achieving this.

“There are a whole lot of issues around this and you know, women are attacked personally whereas men are not,” she said in an interview with The Fiji Times.

“They are not seen as leaders, so women are in a very restrictive environment. Women lose the courage to stand and I think we need to up the heat on women’s participation and leadership at that level.

“We have many women leaders at the CSO (civil society organisation) level and business level but there is that fear of getting into Parliament.”

Ms Ali said there must be an enabling environment created for women to ensure they were supported and able to campaign freely.

“There is this whole thing about how does one campaign in this environment because every time we want to open up, they are not able to do that so it can also be quite intimidating because campaigning is about how you are going to change things and make things better.”

The Fiji Times also spoke to political parties contesting this year’s elections on their take on women in politics.

National Federation Party leader Professor Biman Prasad said women representation in politics remained extremely low, and this was reflected in the fact that only 26 per cent of women globally were parliamentarians. “We definitely have to do more to get more women elected to our Parliament here in Fiji and we have to seriously consider having a quota and NFP in government will push for a quota so we can have at least a guaranteed level of women leaders in Parliament,” he said. Prof Prasad said they would like 50 per cent of candidates to be women but getting there would be a challenge. “We have found some who are interested in politics. We have a lot more who are concerned about current leadership of Government and worry about the future but there are many factors which discourage them to join active politics.” He said draconian laws governing the country and silencing dissenters were the major contributing factors that pushed women away from participation in public office. “Our party over the years has supported women’s groups efforts to fight for equality for women and violence against women. We have highlighted the economic cost of this menace in our society. “We have been concerned about the inequality in wages and in salaries between men and women workers. The party has constantly highlighted in and outside of Parliament the scourge of poverty affecting our women and children and other issues affecting our women and children.” Prof Prasad said NFP was leading by example, and women were actively encouraged to hold senior positions. “Currently two of our national vice-presidents are women. Our general secretary and assistant general secretary are women and they are all members of the management board. Our three members in Parliament, one is a woman. The chair of the selection committee for choosing candidates is a highly accomplished woman — Ms Priscilla Singh.”
Prof Prasad encouraged women to come out in numbers and support those who were joining politics.

Unity Fiji leader Savenaca Narube said participation of women in Parliament and other spheres of leadership must be increased. He said many women were not prepared to step up and be a candidate for the election, thus more advocacy must be done to unshackle the chains of women participation in political leadership. “Unity Fiji is targeting at least 20 per cent women candidates and after approving 52 candidates, the percentage is 24,” he said. “More women are interested in politics than 10 years ago. In our campaign meetings, we are seeing more women attend these meetings compared with the 2018 campaign but the women are still not asking questions compared with their male counterparts.” The former Reserve Bank of Fiji governor said culture had a lot to do with the choices of women, along with education. “We have campaigned on issues of gender-based violence, and family values. Women play a pivotal role in our lives and also in society. Yet, this generation has not fully empowered women to take their rightful place in the leadership of the country. “When will we get our first lady president? Why are parliaments only electing men as presidents? Government leadership must lead the way and change the traditional mindsets of the people.”

Fiji Labour Party vicepresident Monica Raghwan said there was room for improvement when it came to getting women into politics. “Ideally it would be nice to see 50 per cent of the Parliament with women representation,” she said, adding that non-governmental organisations associated with politics had a good number of women participation. This included the parliamentary secretariat as well. “We are open to any number of women and youth participating. The only time I would think we would need to set a quota will be if women out-number the men in applying. Then fair enough to say 50 per cent. If we need to conduct a primary, that will be done irrespective of gender.” Ms Raghwan said politics in Fiji had been quite turbulent since 1987. “Election campaigns  cost money and if one is ousted early, there is no compensation. This would not be just for the women but also for men. It’s a risk one takes. It can be a very expensive one for some, and whole families have to deal with it. “Sometimes campaigning requires you to be out at night, many women have families they need to look after. Learning how to balance a career in politics and balancing family, social and community obligations can be quite challenging. “Personal safety and possibly dealing with character assassination is pretty high on the list for women. To correct something is sometimes almost next too impossible.” She said the FLP had campaigned on a number of issues for both women and youth, and this would be highlighted in the party’s manifesto to be released shortly. “Currently, we have a dozen provisional women candidates. We still have room for a few more as we have only announced 45 provisional candidates so far. Everyone has an opinion on politics and that’s all very well. It takes being informed and a fair bit of courage to step into the political arena. “Hats off to the women of the past who have paved the way, the present who continue to carry the flag and those in the future who will be trained to take us forward. And a big thank you for the men who listen, engage in dialogue and support us.”

The People’s Alliance deputy party leader Manoa Kamikamica said the party was trying to get more women into politics. “It is very important as they bring richness to decision making and so from the party’s perspective, it is very important,” he said. “The People’s Alliance party constitution says that 30 per cent of the members of the executive or the various machineries in the party need to have at least 30 per cent women. “It’s still a promise but this is very important for us “The interest from women has been very positive. I think when you see the final list of women candidates that will affirm that there has been quite a bit of interest. We have some very capable ladies and hopefully Fiji will see that and vote for them.” Mr Kamikamica said politics had been maledominated for a long time and there remained a lot of anxiety about women joining the field. “Even the current lady politicians are proof that they have a good role to play in political discourse.”