UN75 Community Week in support of the Western Division 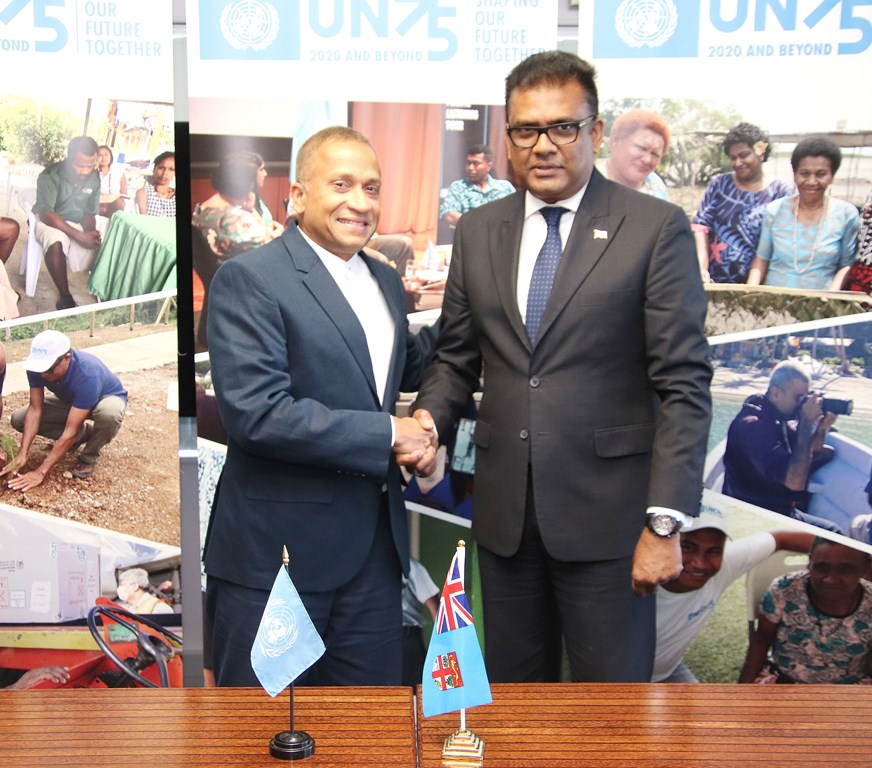 UN Resident Coordinator, Sanaka Samarasinha with PS, OPM and Acting PS Foreign Affairs, Yogesh Karan during the press conference for the announcement of the UN 75 Community Week scheduled to take place in Nadi from 7-12th December this year. Picture: SUPPLIED

The United Nations (UN) in partnership with the Government of Fiji today announced the details of a Community Week scheduled to take place in Nadi from December 7-12 this year.

The initiative is the final component of the UN’s 75th anniversary year calendar in Fiji and the first of its kind in the country.

Speaking at a press conference this morning, UN Resident Coordinator, Sanaka Samarasinha said, “The UN75 Community Week was born from the UN and the Fijian Government’s joint goal to execute a high-impact initiative for the people of Nadi and Western Viti Levu as tens of thousands continue to struggle amidst the socio-economic impacts of the COVID19 pandemic. We are bringing together a vast array of partners across the diplomatic corps, private sector and civil society to generate a hike in economic activity through the week; provide critical service delivery; and support laid off workers through business and skill development sessions.”

“Our three-fold goal is to provide service delivery; create opportunity for dialogue where communities can deliver messages directly to policy and decision makers; and advocate to build awareness around some of the crucial issues affecting Fiji, the Pacific and the world at this important juncture in history,” Mr Samarasinha said.

“As has been our emphasis throughout the year, we are especially targeting women and girls; youth and persons living with disabilities.”

Western Viti Levu has been one of the hardest hit in Fiji, with more than 100,000 people losing their jobs across tourism and related sectors. This is now compounded with the uncertainty of the cyclone season.

Speaking at the press conference, Permanent Secretary, Office of the Prime Minister, Immigration and Sugar Industry and Acting Permanent Secretary Foreign Affairs, Yogesh Karan conveyed the  Government’s appreciation to the United Nations for the innovative partnership in organising the UN 75 Community Week.

“On behalf of the Fijian Government, I congratulate the UN Resident Coordinator, the diplomatic community and all stakeholders and key partners involved in the commemoration of the United Nations (UN) 75th Anniversary. The anniversary celebrations will reflect the UN75 theme “The future we want, the United Nations we need: reaffirming our collective commitment to multilateralism”.

“The theme itself is very diverse and we are very grateful that the UN Team has a well thought theme for the celebrations. There are opportunities to explore innovative options across various sectors that will be present on the two days.”

While reflecting on Fiji’s collaboration with the UN, Mr Karan said that the UN75 Community Week coincides well with the commemoration of 12th December as the 5th Anniversary of the establishment of the Paris Agreement.

“Fiji was the first country to ratify the Paris Agreement and we have continued to champion the cause for climate action through sustainable use of our environment, at the global stage. I am very pleased to mention that the Hon. Prime Minister is the recipient of the 2020 Champion of the Earth award in recognition of his policy leadership on innovative sustainable development initiatives. The award ceremony will be part of this event, and this is another significant milestone for Fiji and the region.”

“As we reflect on our 50 years UN membership; Fiji is recommitting its unwavering support to the United Nations and the important work we undertake together to make the world a better place. Now more than ever we need a strong UN to deliver a just and equitable distribution formula for the COVID-19 vaccine, to deliver a strong Paris Agreement, to deliver a solid foundation for a sustainable ocean, to deliver a peaceful and harmonious world and of course to deliver on the 2030 Agenda,” Mr Karan said.

Friday, December 11 and Saturday, December 12 will be community and family days, with full-day activities planned at Prince Charles Park.

Colorful exhibitions from countries around the world have been organised by embassies and diaspora communities; global cuisine is expected to be available with local restaurants and hoteliers Kanu, Radisson Blu, Tanoa Restaurant, Jack’s of Fiji and more; plus Culinary Master Classes have also been organised by the UN Local Expatriates Spouses Association.

Through the UN REACH Program, led by the Ministry of Women, Children and Poverty Alleviation, the public will be able to access a wide range of services that include the registration of births, deaths and marriages, banking facilities for financial literacy through the different banks, legal services through the Legal Aid Commission and others.

As an added incentive for Fijians living outside the Western division to participate, Fiji Airways, Radisson Blu Hotel, The Westin Hotel and The Hilton Hotel today released special UN75 airfare and hotel rate packages for those traveling in to be a part of the community days.