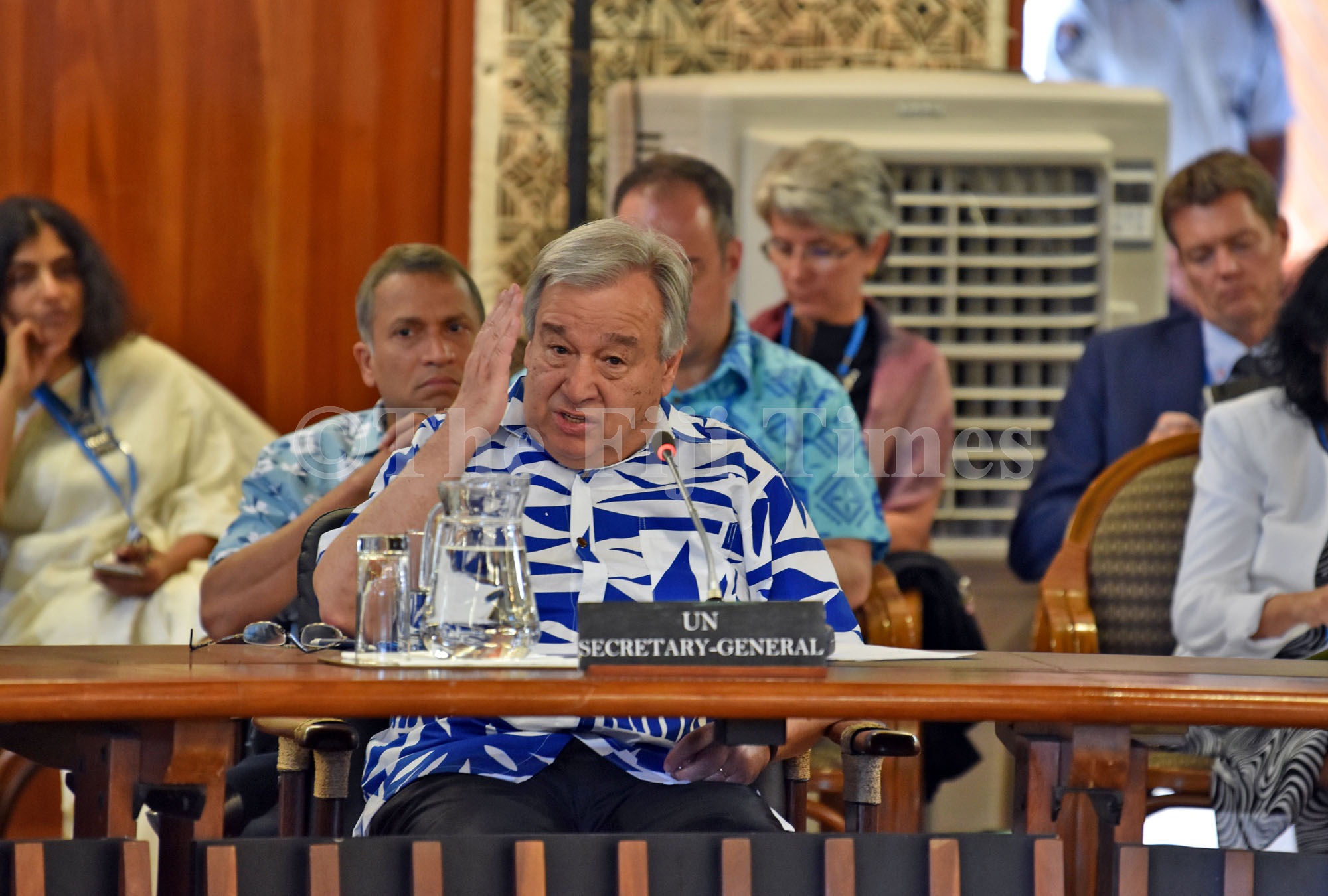 United Nations Secretary-General António Guterres while speaking to Pacific leaders and guests at the Pacific Island Forum Secretariat in Suva on Wednesday, May 15, 2019. Picture: JONACANI LALAKOBAU

SUVA, 20 MAY 2019 (PACNEWS) – United Nations Secretary, Antonio Guterres is convinced that climate change is striking Tuvalu in a dramatic way, more than anywhere else in the world, after his day trip to the island nation last Friday.

And, he’s expressed his support and solidarity with Prime Minister Enele Sopoaga and the more than 11,000 people of Tuvalu.

“I have enormous admiration for how you have decided to resist and you are implementing a programme of adaptation and resilience that is something that the whole world should admire and support.”

He said it’s necessary that governments that are still causing the problems that affect Tuvalu understand that they need to change.

“They need to change their energy policies, their transportation policies, the way they manage their cities, the way they are using fossil fuels so that the impact of climate change on Tuvalu can be stopped. Climate change cannot be stopped in Tuvalu, it has to be stopped in the rest of the world, said secretary General Guterres, who was transported in an Australian defence force plane to the Pacific nation.

Before landing, Guterres requested to view the low lying atoll nation from the back of the airforce plane that was opened. A tweet from the Office of the UN Spokesperson, said, “He does his own stunts! Secretary-General @antonioguterres looks out from the plane as he arrives in Tuvalu to witness the impacts of climate change firsthand” with a photo of the UN top diplomat looking down to one of the low lying atolls in Tuvalu.

He’s assured the people of Tuvalu that he will be fighting during the Climate Action Summit in New York to make sure all countries accept the commitment to be globally carbon neutral by 2050 and limit the increase in temperature to 1.5 degrees.

“At the same time, I want to express my deep solidarity and the total support from the United Nations to the government and to the people of Tuvalu in your determined efforts to preserve your country – physically, culturally, in the economic and social dimensions, as a rich component of the Pacific and the international community, said Guterres.

In response Prime Minister Sopoaga said Tuvalu was touched by the UN Secretary General message of support and solidarity.

The Tuvalu PM said Guterres is the second only Portuguese to set foot on Tuvalu, the first one a Portuguese Captain who sighted Nukufetau hundreds of years ago.

After their statements, both leaders planted a coconut tree at the Queen Elizabeth II Park before they took part in a canoe paddling activity at Vaiaku before Guterres were taken visited a Tuvaluan family at Lofeagai, residing close to the lagoon that is exposed to the impacts of climate change.