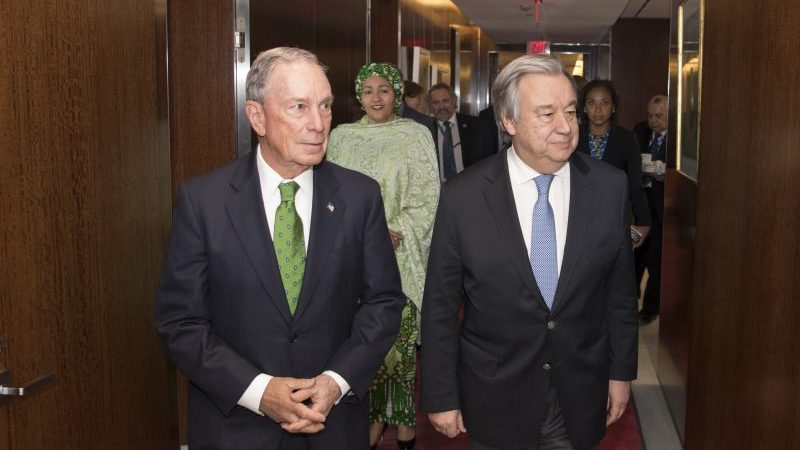 The billionaire businessman and former New York mayor is charged with steering private finance towards clean energy and climate resilience projects around the world.

UN chief Antonio Guterres said in a statement this would contribute to the global target of raising US$100 billion a year in climate finance to developing countries by 2020. It is set to be a key theme of a climate summit at UN HQ next September.

“Mobilising resources from the public and private sectors is critical to tackling the issue of climate change,” said Guterres. “In this year of action leading up to my climate summit, I am pleased Mike Bloomberg, my special envoy for climate action, has agreed to convene private sector leaders through this initiative and work closely with leading governments to help ensure we can meet the objectives of the Paris Agreement.”

It came as another Bloomberg-led initiative, to get multinationals to come clean about their exposure to climate-related risks, published its first status report. There were some signs of companies sharing more information, the report found, but it was far from embedded in financial decision-making.

Building on that work, Bloomberg is set to convene development banks and private financiers to trade ideas on climate-friendly investment.

“The market’s allocation of capital is a powerful weapon in our fight against climate change. As climate risks and opportunities become more transparent, investors and businesses are increasing financing for climate solutions,” said Bloomberg. “I’m glad to help the secretary-general accelerate this critical transition over the coming year.”

Critics said greening mainstream finance was no substitute for the cash that rich countries promised to help the poor cope with the impacts of climate change, however.

While renewables are increasingly commercially attractive, interventions like flood defences or drought resistant seeds for subsistence farmers may not pay dividends for private investors.

“Obviously, any effort to meet the urgent need for climate finance is good news and should be applauded,” said Amjad Abdulla, chief climate negotiator for the Maldives and chair of the Alliance of Small Island States.

“Still, we have long highlighted the fundamental importance of public funding when it comes to climate change. Private finance is simply too unpredictable to provide the kind of certainty of access every finance ministry from a vulnerable country knows is critical to meeting this challenge.”

Bloomberg, who was mayor of New York as a Republican, is reportedly considering running for US president in 2020 as a Democrat. This would likely pit him against Donald Trump, who has said he will withdraw the country from the Paris climate deal and has stopped US climate finance payments.