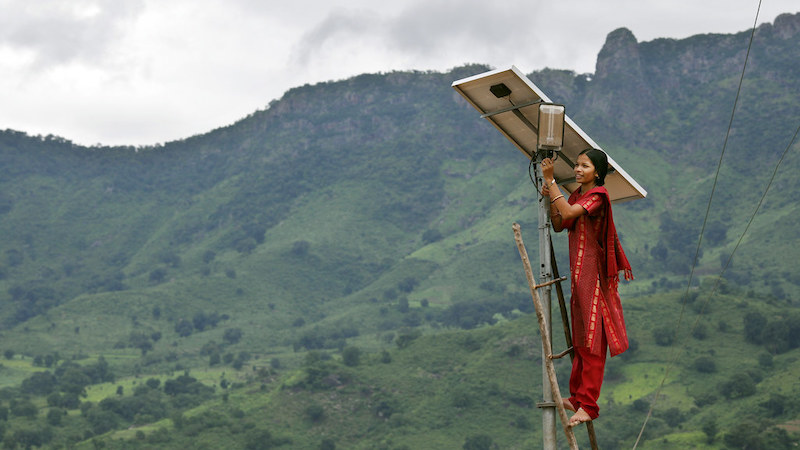 The Solar Powered Village of Tinginapu, in the Eastern Ghats of Orissa: Barefoot solar engineer Minakshi Diwan 20, tends to maintenance works in the solar village. The Orissa Tribal Empowerment and Livelihoods Programme (OTELP) is an organisation funded by DFID and run with the state government of Orissa. The project took 4 women from a remote tribal village and trained them in Solar Powered Engineering, and installed Solar lighting in their village which had not seen electricity for over 15 years. The Orissa Tribal Women’s Barefoot Solar Engineers Association has now got a contract to build 3000 solar-powered lanterns for schools and other institutions and is training other people in the community.

SONGDO, 10 JULY 2019 (CLIMATE HOME) – Governments will be unable to unilaterally veto internationally-funded climate projects, after a deal was struck on Green Climate Fund rules that had hampered progress for years.

Following intense backroom negotiations, the UN flagship climate fund’s board agreed at 3am on a voting system to deploy when consensus fails.

A year after a public boardroom meltdown, the move signals stronger collaboration between rich and poor country representatives, as they seek a fresh injection of funds.

“This was a huge trust-building exercise and acknowledgement that the future of the fund is better built together than against each other,” wrote Liane Schalatek, an observer from the Heinrich Böll Foundation, by Skype from the GCF headquarters in Songdo, South Korea.

Some of the countries hardest hit by climate change had already aligned with donor governments in calling for governance reforms, to get money flowing faster.

Saudi Arabia, Egypt and Iran were the last hold-outs, raising concerns a voting system could disadvantage the developing world. The board is drawn half from donor and half from recipient countries, but the latter bloc is more diverse: China has different interests to Chad.

At the same time, emerging economies had an incentive to end the veto power of individuals. In 2018, the U.S board member was able to block a Chinese project – despite his country reneging on a pledged US$2 billion contribution. In 2017, the UK refused to back grants for rural development in Argentina and Paraguay.

A breakout group of eight board members thrashed out rules allowing decisions to be made with an 80 percent majority, a higher threshold than the two thirds originally proposed. Consensus remains the preferred option.

“It was encouraging to see the board come together and fulfil this mandate from its founding instrument,” said Niranjali Amerasinghe of the World Resources Institute (WRI), adding that attention must now turn to “an ambitious replenishment” of the fund’s cash reserves.

The board approved US$267 million of finance towards ten projects, taking its total commitments to US$5.23 billion. It is reaching the bottom of its US$10.3bn starting capital faster than expected, due to currency fluctuations and the US withholding money.

Now the fund is looking to wealthy countries for further contributions, with a pledging summit in autumn to raise cash for the next three years. Germany and Norway have committed to doubling their input, while others indicated they first wanted to see the initial round had been well used.

A performance review presented at the latest meeting struck an optimistic tone. The fund “has achieved a lot” in four years and “has the requisite capacity, learning disposition, leadership and structures for being an agent of change,” wrote independent GCF evaluator Jyotsna Puri.

Among its recommendations were to channel more funds direct to the front lines of climate impacts and to strengthen the role of the private sector.

One of the main criticisms of the fund from recipients is that it is slow to release money, even after it has been approved. Analysis by WRI before the latest meeting found the GCF had disbursed 10 percent of approved funding in its first four years of operation, compared to 17 percent for the Climate Investment Funds (Cifs), 26 percent for the Global Environment Facility and 42 percent for the Adaptation Fund.

Analyst Joe Thwaites said part of the problem lay with partner organisations. For example, the World Bank took three and a half years from getting accredited to signing project deals.

The GCF secretariat prefers to cite the value of projects “under implementation” – US$2.41bn compared to US$0.51bn – on the basis many do not get all their money upfront and are phased over a longer period.

“Things are improving,” according to Thwaites, and by the end of the year GCF performance is expected to catch up with the Cifs.