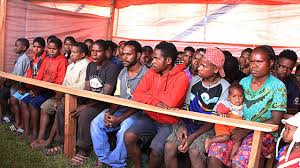 The UN Office of the High Commissioner on Human Rights has highlighted what it says is a culture of impunity among security forces in the provinces.

The demand comes a fortnight after a video went viral showing a handcuffed Papuan youth being interrogated by Indonesian police with a snake wrapped around his body, and as the UN group negotiates with the Indonesian government for access to the restive provinces.

There have also been reports this week that hundreds of students have fled fighting between the West Papua Liberation Army and Indonesian security forces in the highlands district of Nduga, following the December massacre of 16 government workers.

The video showed an indigenous youth, arrested on February 6 on suspicion of having stolen a mobile phone, yelling in fear while police officers push the snake’s head towards his face.

In a statement released on Thursday night the UN said the case reflected a “widespread pattern of violence, alleged arbitrary arrests and detention as well as methods amounting to torture used by the Indonesian police and military in Papua”.

The group of five UN experts includes the Special Rapporteurs on the rights of indigenous peoples; torture cruel and inhumane treatment; on the situation of human rights defenders; on contemporary forms of racism, racial discrimination, xenophobia and related intolerance; as well as the chairman of the UN Working Group on Arbitrary Detention.

The Papuan police have publicly apologised for the incident, and said an officer involved had been investigated and suspended for ethical violations.

But, the UN group has said prompt and impartial investigations must be carried out.

“We urge the government to take urgent measures to prevent the excessive use of force by police and military officials involved in law enforcement in Papua. This includes ensuring those, who have committed human rights violations against the indigenous population of Papua are held to account,” it said.

“We are also deeply concerned about what appears to be a culture of impunity and general lack of investigations into allegations of human rights violations in Papua.”

Papuan police commissioner Ahmad Mustofa Kamal told The Australian there was “no such thing as a culture of impunity, racism or excessive use of force” in the local police force, and it was an “exaggeration” to say there was systemic use of torture and racism towards indigenous Papuans.

“We always use force proportionally, we treat every citizen of Papua equally,” General Kamal said.

“We provide services and protection and enforce the law equally, regardless of race and religion, including investigating one of our own officers. This was an isolated incident and the officer has been punished.”

Human rights groups have long-accused successive Indonesian governments of sanctioning the violent suppression of Papua and West Papua’s independence movements, fearing their success could encourage similar movements in other provinces.

Indonesia’s National Commission on Human Rights has estimated more than 10,000 people were killed in Papua and West Papua during the 32-year Suharto era which ended in 1998.

An Amnesty International report last year found security forces were responsible for 95 extra-judicial killings in the two Papua provinces over the past eight years — almost one a month.

While The Netherlands granted Indonesia independence in 1949 it held onto Papua until 1962 when it ceded control of the province to the UN.

Indonesia was granted de facto control the following year and in 1969 conducted the so-called Act of Free Choice referendum in which 1025 men and women selected by the Indonesian military voted to determine the political status of the province.