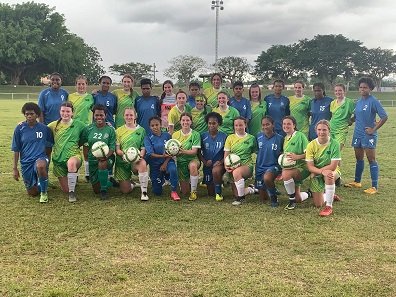 GAMES were spread from Nadi to Ba on day five of the Ultimate Fiji Soccer Cup on a day which determined the finals for the development and junior age groups.

In the boys development division, Ba toppled Lautoka 2-1 to finish top of the group with 11 points.

Lautoka finished second on five points meaning the two Fijians outfits will face off in the final at Lautoka’s Churchill Park on Friday.

IFG New South Wales beat Nadi 1-0 in the other match and the sides will play against in the third and fourth place playoff.

The boys junior division will be an all-Fijian affair between Lautoka and Nadi while the girls junior division final will feature IFG NSW and IFG South Australia. Both matches will be played at Churchill Park.

The four older age groups are all up in the air heading into the last round of matches on Friday.

There was a pulsating 3-3 draw between Fiji North and Manukau United in the boys senior division while in the girls senior division, IFG NSW scored in the dying stages of the match to beat Fiji West 3-2.

Competition director Bruce Tilt said he was looking forward to watching the younger finals and is hopes the teams enjoy playing at one of the country’s premier venues.

“Lautoka and Ba are fighting off for the championship in the boys development, once again showing the progress Fiji Football is making in the younger levels,” he said.

“The boys junior competition has been very competitive with five teams showcasing some outstanding football. Lautoka and Nadi will contest the final after being a little more consistent than the rest.

“In the girls, roles are reversed with two Australian teams with IFG NSW playing against IFG South Australia. IFG NSW have been very strong throughout the week and it will be interesting to see if SOuth Australia will change tactics to gain some momentum.

“Churchill Park is a grand stadium and I hope they enjoy playing their and enjoy their day.

“It is the last day of the round robin in the older age groups. Several teams have put themselves in a position to have a chance of playing in the final on Saturday.”

As well as Churchill Park, games will also be at the Fiji Football Academy in Ba on Friday.

Fiji South v Fiji West (scores not in yet)

Fiji West v Fiji South (scores not in yet)