UK’s May says to seek ‘pragmatic’ Brexit solution in Brussels 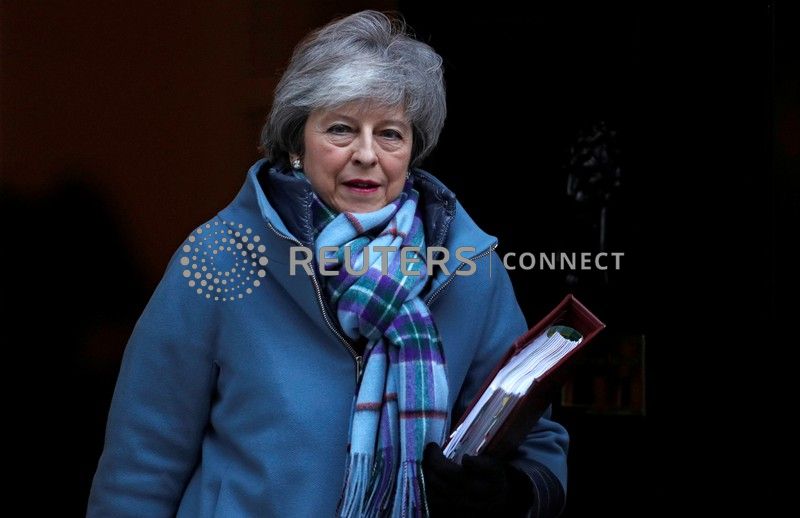 LONDON (Reuters) – British Prime Minister Theresa May said she would seek a “pragmatic solution” to a parliamentary impasse over the terms on which Britain leaves the European Union when she tries to reopen talks with Brussels.

May, writing in The Sunday Telegraph newspaper, shed little light on how she intended to solve the issue that has provoked most opposition from her lawmakers, post-Brexit arrangements for the border between the United Kingdom and Ireland.

Last month May suffered a record parliament defeat over her Brexit plans, and on Tuesday lawmakers instructed her to return to Brussels to renegotiate arrangements for Northern Ireland.

Lawmakers “would … be happy with the current backstop if there was a time limit or unilateral exit mechanism,” May wrote.

However, Ireland and EU negotiators have rejected any time-limit on the so-called ‘backstop’ — a set of fall-back plans that would retain an open UK-Ireland border if Britain and the EU fail to reach a longer-term trade agreement in future talks.

Brexit supporters fear an unlimited backstop would effectively give the EU a veto on future British trade arrangements with other countries, and weaken economic ties between Northern Ireland and the rest of the United Kingdom.

May is expected to visit Brussels in the coming days.

“When I return to Brussels I will be battling for Britain and Northern Ireland, I will be armed with a fresh mandate, new ideas and a renewed determination to agree a pragmatic solution that delivers the Brexit the British people voted for,” May said.

Separately, May’s office rejected a report in the Mail on Sunday newspaper that her advisors were considering an early election on June 6 if she got a Brexit deal through parliament.