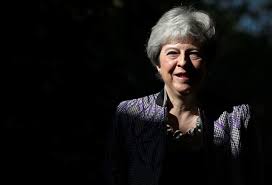 LONDON (Reuters) – Prime Minister Theresa May told Ukraine’s President-elect Volodymyr Zelenskiy in a congratulatory call on Tuesday that Britain would continue to support his country’s sovereignty and territorial integrity, her office said.

“The Prime Minister stressed the importance of our two countries working together alongside the international community to deter Russian aggression,” a spokeswoman for May said in a statement, following Zelenskiy’s election victory in a run-off on Sunday.